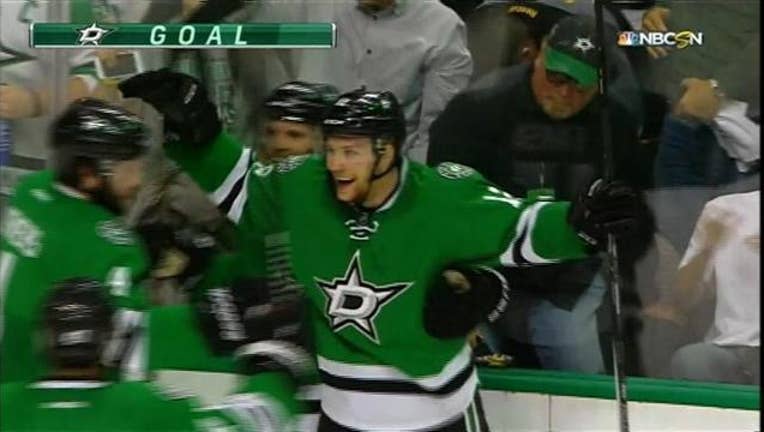 DALLAS (AP) — The kid is all right for the Dallas Stars.

Radek Faksa, the rookie center who split his season between the AHL and the NHL, scored the winning goal off a rebound with 4:44 to play and had an assist on the Stars' other goal in a 2-1 victory over the St. Louis Blues on Friday night in Game 1 of the Western Conference second-round series.

"He brings enthusiasm, a big smile on his face, the willingness to do whatever it takes to win right now," coach Lindy Ruff said about the 22-year-old Faksa. "He's having a great time. He's a kid that. He's enjoying every minute he plays, and you can see it in his game. His play has been infectious for our team."

Like Antoine Roussel did on his second-period goal when Faksa had an assist, Faksa started the rush that led to his tiebreaking goal.

After Faksa pushed the puck up the ice, Alex Goligoski made a pass to Ales Hemsky for the initial shot stopped but not secured by Brian Elliott. Faksa, who lives with the family of fellow Czech and 10-year older Hemsky, was there to score his second goal of the playoffs.

"I'm very excited after every goal, maybe too excited," said Faksa, who dropped to a knee and put his hand to his ear after scoring. "Just a big excitement for me. It just feels great."

The Blues had gotten even at 1 when defenseman Kevin Shattenkirk scored on a shot from the top of the left circle after Dallas failed to clear the puck out of the zone with 8:28 left in the game.

St. Louis was coming off a seven-game opening series against defending Stanley Cup champion Chicago Blackhawks, and maybe there was some hangover from that series that ended Monday.

"Well, I think what you're hoping for, is that is it," Blues coach Ken Hitchcock said. "But we can't have that excuse in Game 2, we need to take a game in this building."

Game 2 is Sunday in the best-of-seven series matching the Western Conference's top two teams from the regular season.

Hitchcock was coach of the Stars when they won their only Stanley Cup in 1999, ending on a disputed clinching goal in triple overtime of Game 6 against the Buffalo Sabres and coach Lindy Ruff, now in his third season with the Stars. The coaches also went head-to-head in the 2006 playoffs, when the Sabres beat Hitchcock's Philadelphia Flyers.

The two have become good friends since being assistant coaches as Team Canada won gold medals in the last two Winter Olympics.

Kari Lehtonen stopped 31 shots, withstanding a final surge when the Blues pulled Elliott out of the net and had an extra skater the final 1:40.

Elliott, who has played all eight playoffs games for the Blues, had 40 saves.

"Just a very fast game, they're very fast through the neutral zone, their transition game is a little faster paced than Chicago," Shattenkirk said. "They like to get that puck up and going to the net as soon as possible. It's not like they have any secret formula, they just throw a lot of pucks at the net and try to crash there and get second and third opportunities."

Dallas took its initial lead midway through the second period when Roussel started a rush down the right side and then had a cross-ice pass John Klingberg before Faksa's wrist shot from the left slot. Roussel was there to knock in the rebound.

When someone remarked to Jason Spezza that they didn't' know much about Faksa, the veteran center responded, "Well, you're going to learn. He's a heck of a player. Hockey I.Q. He's always in the right spot."

Notes: It was Roussel's second goal of the playoffs. His first came from behind the net in Game 2 of the first-round series against Minnesota on a puck that ricocheted off a teammate's skate and then hit Roussel's, popping over the net and into the back of the goalie's head before falling into the net. ... Stars right wing Patrick Eaves was down between the circles and had a struggle getting off the ice after getting hit by a shot taken by teammate Stephen Johns early in the third period. Once to the bench, Eaves hobbled to the locker room. ... The Stars hosted a Game 1 in the second round for the first time since 2003, the last time they were a No. 1 seed. ... St. Louis opened a playoff series on the road for the first time since 2009. ... Masters and U.S. Open champion Jordan Spieth was in a suite watching his hometown team with former Stars captain Brenden Morrow. In another suite was Dallas Mavericks star Dirk Nowitzki.