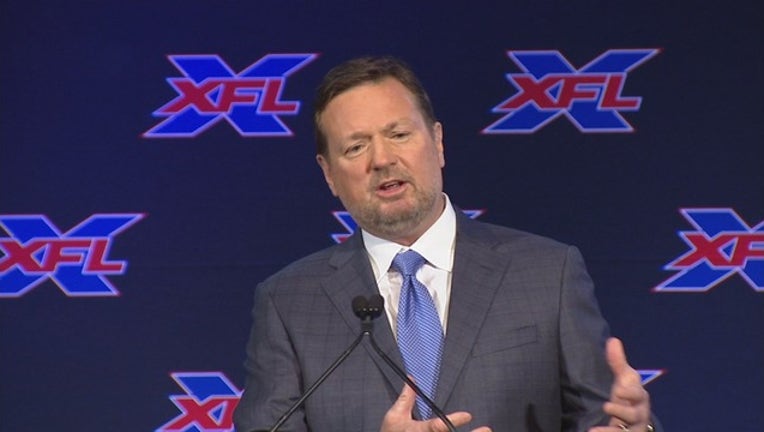 ARLINGTON, Texas (AP) - Bob Stoops initially rejected the idea of coming out of retirement to join the reincarnation of the XFL.

Then the former Oklahoma coach had time to think about all the extra time in his schedule roughly a year and a half after he stepped away from the Sooners after 18 seasons .

Add a little arm twisting from league commissioner and former college administrator Oliver Luck and a chat with XFL benefactor Vince McMahon, and Stoops decided he was ready to get back in football.

The 58-year-old Stoops was named coach and general manager of the Dallas franchise on Thursday at the home of baseball's Texas Rangers. A reconfigured Globe Life Park will be the home field for Dallas when the XFL debuts in the spring of 2020, about the same time the Rangers move across the street to a new ballpark.

"When I stepped away a couple of years ago, one of my major reasons, and I made it very clear, is I wanted my own time," Stoops said of his abrupt retirement in June 2017, just three months before the start of the season. "As the only saying goes, be careful what you wish for. All of a sudden, I got to thinking after a couple of years, some days I've got too much time on my hands. You start to look at what are your options."

The XFL is returning after an ill-fated single season in 2001 before the league disbanded. McMahon has vowed to put more emphasis on football with his relaunch after the original league followed a theatrical model more suitable to his pro wrestling ventures.

Stoops brushed off questions over why he would join a league that failed badly the first time around, and he wasn't very interested in whether his return fed speculation that he didn't leave the Sooners on his own terms.

While he did acknowledge "inquiries" from other college programs, Stoops wouldn't say anything more. This is the right fit, he said, in large part because it's not far from his roots in Norman, home of the Oklahoma campus.

"Through our discussions as a family, started to think this may really fit us correctly, for a lot of reasons," Stoops said. "And my first was my confidence in Oliver Luck on up through to Vince McMahon. These are accomplished men who have had success in everything that they've done for the most part."

Stoops' retirement as Oklahoma's winningest coach along with 10 Big 12 championships and a national title cleared the way for young offensive coordinator Lincoln Riley to take over. The youngest head coach in FBS at 33 at the time, Riley has won the Big 12 and qualified for the College Football playoff in both of his seasons. The Sooners lost in the semifinals each time.

"You were waiting for the other shoe to drop. Yeah, and there isn't one," Stoops said when pressed about the timing of his decision, and speculation surrounding it. He said at the time there were no health concerns.

"And you found out that it was actually good timing wasn't it?" he said. "How has OU done? Did they lose any recruits when I stepped down?"

At some point, the speculation figures to shift to whether Stoops will want back in the college game someday. For now, he will look to hire offensive and defensive coordinators within the next couple of weeks. He seemed amused over the fascination for what this move meant.

"Everyone wants you at (56), when I stepped down, well, what's going to be the rest of your life?" Stoops said. "Truth be told, this wasn't an option when I stepped down. Now, would I have been thinking about it at that point? Probably not. But it's two years later."