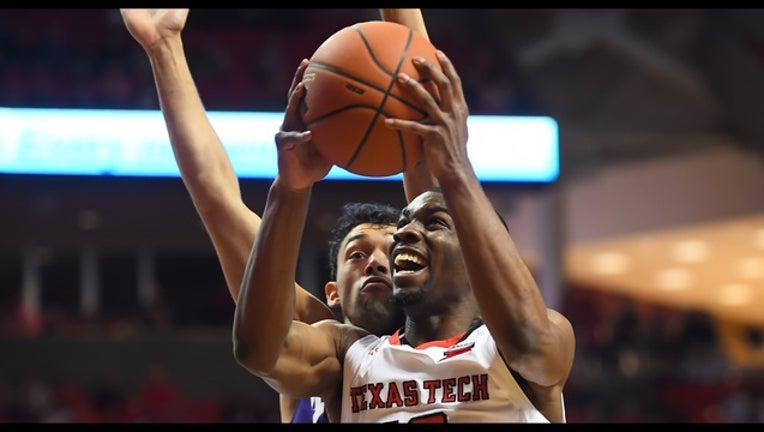 Keenan Evans #12 of the Texas Tech Red Raiders goes to the basket against Alex Robinson #25 of the TCU Horned Frogs during the second half of the game on March 3, 2018 at United Supermarket Arena in Lubbock, Texas. (Photo by John Weast/Getty Images)

One half against TCU made it all feel better.

Evans scored all 23 of his points after halftime and the 12th-ranked Red Raiders stopped a four-game losing streak with a 79-75 win over the Horned Frogs in a Big 12 regular-season finale on Saturday.

Evans had three straight single-digit games, starting when he was injured late in the first half of a loss to Baylor that started the skid when the Red Raiders (23-8, 11-7) were in sole possession of the Big 12 lead. He sat out Monday's loss at No. 20 West Virginia.

With Evans hobbled, the Jayhawks pulled away for an NCAA-record 14th straight conference title, clinching a tie for the championship a week ago on Tech's home court. The Red Raiders and West Virginia finished tied for second.

"Still not completely 100 percent," Evans said. "But to be able to move like I was today is just progress. I'm just staying in the training room and getting as healthy as I can for my teammates and keep this going."

Desmond Bane scored 21 points for the Horned Frogs (21-10, 9-9), who had their first four-game conference winning streak in 20 years stopped. The late-season surge put TCU in good shape for its first NCAA Tournament berth since going 14-0 in the Western Athletic Conference in 1997-98.

"We feel good," coach Jamie Dixon said. "Obviously won four in a row. It's funny. I think they'd lost four in a row, if I had it right. Now they feel really great and we don't. One game can change everything."

With Texas Tech leading by two in the final 2 minutes, Evans hit a layup before Justin Gray and Zhaire Smith each hit a free throw for a six-point lead with 20 seconds to go.

Evans was 6 of 11 from the field and repeatedly got to the basket, getting layups or free throws. Evans was 10 of 10 at the line - all in the second half.

"Keenan, like most great players, lets the game come to him," Texas Tech coach Chris Beard said. "At a certain point, you've got to get aggressive. I'm not telling Keenan Evans much this time of year. Just be yourself, be aggressive, be confident, believe in yourself, let me know how your foot's feeling."

Vladimir Brodziansky had 16 points and 10 rebounds for TCU, and Kenrich Williams scored 11 with 10 boards for his 12th double-double of the season. Alex Robinson had 11 points.

The Horned Frogs led by 10 late in the first half, but the Red Raiders finished on a 6-1 run to get within 40-35. A 12-5 run early in the second half pulled Texas Tech even, and the Red Raiders took their first lead on a layup by Smith with 13:25 remaining.

TCU: The Horned Frogs matched their lowest shooting percentage of the season (40 percent) and have had three straight cold-shooting halves going back to the home win over Kansas State that solidified their NCAA hopes. TCU shot at least 54 percent in each of the previous three games.

Texas Tech: Evans' best game since the injury is a huge boost for the postseason hopes of the Red Raiders. Perhaps the game of rest made the difference needed for Evans to be a big factor again, which is a must if Texas Tech wants to make an NCAA run.

Asked what changed when Evans went from scoreless to 23 points in the second half, Dixon said, "Anybody that gets 10 free throws in a half, good things are going to happen. He got to the basket a lot. We had to put different guys on him because of foul trouble."

Gray and Zach Smith were back for Texas Tech after missing the West Virginia game. Gray, who was knocked out of the loss to Kansas when he was blindsided on a screen, had seven points, going 5 of 6 from the line, in 26 minutes. Zach Smith played against the Jayhawks after missing 13 games with a broken foot. After another game off, he had six points in 15 minutes.

Big 12 Tournament. TCU, which finished alone in fifth place, will get a first-round bye along with Texas Tech. Both teams will play Thursday.