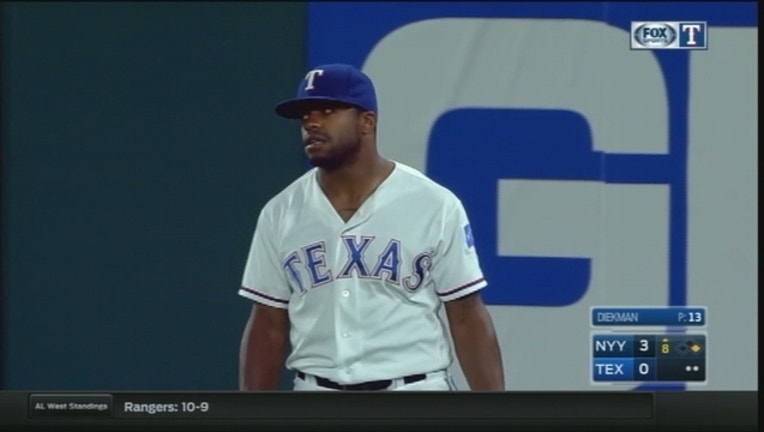 ARLINGTON, Texas (AP) — Nathan Eovaldi lost his no-hit bid in the seventh inning but pitched into the eighth for the New York Yankees without allowing a run in their series-opening 3-1 win at Texas on Monday night.

The Rangers were without a hit until rookie Nomar Mazara, a day before his 21st birthday, led off the seventh with a clean single through the left side of the infield. After Mazara was wiped out by a double play, Prince Fielder swung at a high pitch for a double to right-center before Ian Desmond grounded out to end the inning.

After Eovaldi (1-2) walked Mitch Moreland to start the eighth, Dellin Betances took over and promptly got Elvis Andrus to ground into a double play before Brett Nicholas hit his first career homer. That was the first earned run off the Yankees reliever in 10 appearances this season.

Andrew Miller worked a perfect ninth for his fifth save in as many opportunities.

Jacoby Ellsbury and Starlin Castro had solo homers for the Yankees off Cesar Ramos (0-1), the lefty starting in place of Cole Hamels.

Eovaldi is only the second major league player from Alvin High School in Texas. The other is Nolan Ryan, who holds the major league record with seven career no-hitters.

The younger big right-hander struck out six, ending his streak of seven consecutive starts with at least seven strikeouts that was tied with the longest in team history. He walked two.

Eovaldi, without a complete game in his 110 career starts, threw 66 of his 98 pitches for strikes.

Ramos, called up from Triple-A earlier in the day, struck out five and allowed three runs pitching into the seventh. That extended the Rangers' record season-opening with starters going at least five innings in all 20 games so far.

The last Yankees no-hitter was David Cone's perfect game against Montreal on July 18, 1999. Texas hasn't been held hitless since Mark Buehrle threw one at home for the Chicago White Sox in 2007. The only no-hitter thrown in the Rangers' current ballpark was Kenny Rogers' perfect game in 1994, the year the stadium opened.

Yankees: DH Alex Rodriguez was out of the lineup a day after exiting a game because of stiffness in his left side. The 40-year-old Rodriguez said he felt good Monday and hoped to get back in the lineup as soon as possible. ... OF Aaron Hicks missed his third game in a row because of left shoulder bursitis. He stretched and threw before the game and manager Joe Girardi hopes he is back by the weekend.

Rangers: Hamels threw 26 pitches in a bullpen session without any issues, and could have another session Wednesday. It was the first time the left-hander threw off a mound since his start last Wednesday. He could be back in the rotation as early as Saturday. ... OF Shin-Soo Choo, on the DL since April 9 with a strain right calf, started hitting off a tee. He said he's feeling a lot better.

Yankees: Luis Severino (0-2, 4.86), the 22-year-old right-hander and the youngest pitcher to start in the majors this season, makes his fourth start this season and 15th of his career.

Rangers: A.J. Griffin, who before this season hadn't pitched in the major since 2013 because of right elbow surgery, is 2-0 with a 3.18 ERA in three starts for Texas. He has thrown at least five innings in 31 consecutive starts, the third-longest active streak behind Jake Arrieta's 41 in a row and Madison Bumgarner's 34.