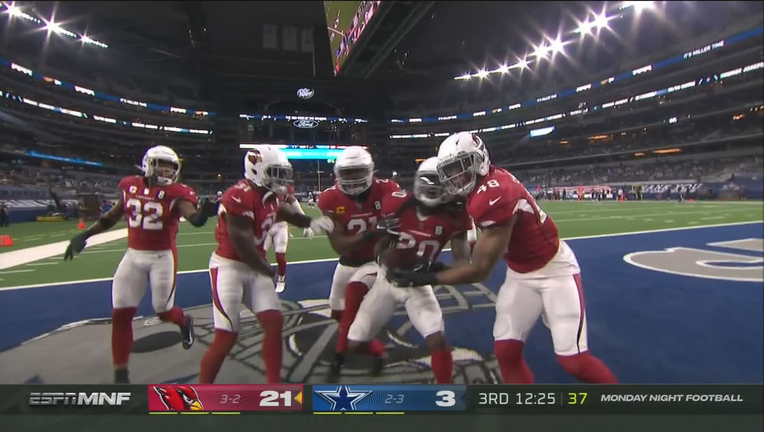 ARLINGTON, Texas - If the Dallas Cowboys are going to win without Dak Prescott, Ezekiel Elliott will have to hang on to the ball.

While Dalton's interceptions added to the club's NFL-worst turnover margin of minus-12, Elliott's miscues were the biggest because they set up the first two Arizona touchdowns, and handed the Cowboys (2-4) a deficit of at least two touchdowns for the fifth straight game.

The good news for the Cowboys? They knew going in they would be in first place in the woeful NFC East no matter what happened. So what seemed like a critical three-game homestand when Dallas was 1-2 ended with two more losses, and a jump in the division standings.

The first Elliott fumble came after the two-time rushing champion took a shovel pass from Dalton as the quarterback was trying to escape pressure. Elliott turned upfield but didn't see Budda Baker, who knocked the ball loose and Jordan Phillips recovered at the Arizona 46.

After Christian Kirk's 6-yard score on a jet sweep that counted as a pass, Elliott fumbled again two plays later at the Dallas 27. Kenyan Drake's 1-yard run made it 14-0.

Elliott has five fumbles in six games (four lost), just one shy of his career high for an entire season from two years ago. He had never lost more than two fumbles in a season before this year, and now has four in 2020.

There was more bad news, too. Four-time All-Pro guard Zack Martin left in the first half with a concussion, leaving the Cowboys without four of the five preseason starters on the offensive line for most of their first game without Prescott, the 2016 NFL Offensive Rookie of the Year who was the NFL's runaway passing leader before the injury.

The two-time rushing champion was benched briefly the next possession, replaced by Tony Pollard before returning in the final few plays of a drive that ended in a punt from the Arizona end.

Pollard ended up with 10 carries to 12 for Elliott, who had 49 yards. Pollard finished with 31 yards. Elliott did have eight catches, but for just 31 yards.

“I think they did the right thing and gave some of those reps to (Pollard),” Elliott said. “I have to be a guy this team can lean on, especially in the times right now with so many of our starters not playing. It’s not acceptable. I need to figure it out.”

The Cowboys have an NFL-high 15 giveaways, and the 84 points they've allowed off turnovers are the most in the NFL through six games since at least 2000.

“Maybe frankly, maybe we’re trying too hard, or maybe we’re overcoaching it,” McCarthy said. “We’ve been playing uphill every single game. We haven’t gotten into a groove or rhythm and got out in front yet this year.”

While the offense didn't help a defense that's been struggling all season, that group faded again after its best start. Dallas gave up Kyler Murray's 80-yard touchdown to Kirk, and Drake broke free for a 69-yard run with the game out of hand in the final two minutes.

The Cowboys have allowed 218 points, the most through six games since the 1961 Raiders gave up 228 as an AFL team. The last NFL team to give up more was Washington in 1954 with 223 points.

Dalton, who won 70 games in nine years as the starter in Cincinnati before signing a one-year deal to be Prescott's backup when the Bengals drafted Joe Burrow No. 1 overall, was 34 of 54 266 yards with a late, meaningless touchdown.

“It’s one of those things where I’m always going to be my worst critic,” Dalton said. “Everybody’s got to do that same thing, got to look at ourselves and what can I do to make me a better player to help us win these games and give us a chance.”