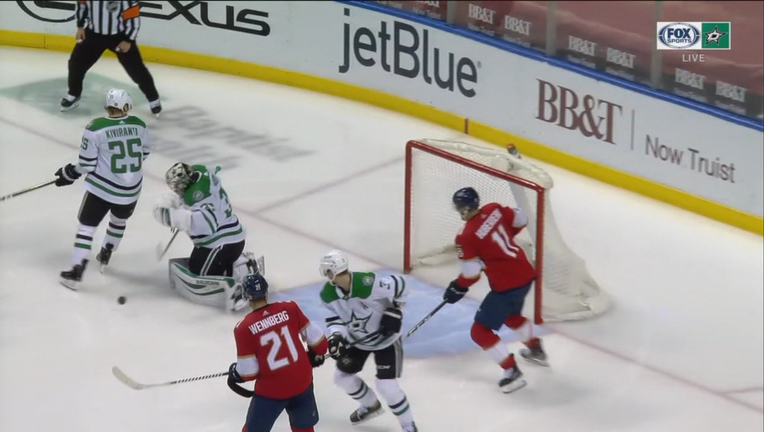 Blake Comeau scored for Dallas, and Anton Khudobin stopped 49 of 51 shots. The Stars lost their sixth in a row and eighth of nine overall while playing their first game since Feb. 13 due to the weather conditions in Dallas.

"Yep. There was a lot of shots," Khudobin said. "It doesn’t matter how I felt. We didn’t get there."

The Stars’ season was twice interrupted — first by a coronavirus outbreak in training camp and then by last week’s winter storm in Texas.

Dallas was supposed to open the season at Florida for two games and then at Tampa Bay for two more, but close to 20 COVID-19 positive cases prompted the postponement of those games. This week, the Stars were scheduled to host the Lightning on Thursday and Saturday, but those games were called off because of power outages in the Dallas area.

"Were we rusty? Yep. Did we play through it? No. In the second period we let them do whatever they wanted," Bowness said. "It was a winnable game, one shot away. We wasted a great goaltending performance. That’s an 8-1 game without Anton."

Trailing 1-0, the Panthers picked up the pace in a furious second period with a franchise-record 29 shots on goal, while the Stars only managed five.

"It was a pleasure to watch," Driedger said. "The guys went to work in the second. I haven’t seen a period that dominant in a long time."

Ekblad tied it at 1 at 8:41 of the second. Ekblad has six goals, tied with Jeff Petry (Montreal) and Darnell Nurse (Edmonton) for most goals by defensemen this season.

Yandle put the Panthers ahead 2-1 on his shot from the point with 1:42 left in the second.

"The first (period) we were off to a little bit of a bumpy start, but we found our legs in the second and it showed," Panthers defenseman MacKenzie Weegar said. "We just kept coming at them and at them."

Comeau gave the Stars a 1-0 lead when he poked in a loose puck at 4:29 of the first. Jason Robertson stretched his scoring streak to five games with an assist on the goal.

Dallas’ Mark Pysyk spent the past four seasons with Florida, playing 292 games for the Panthers, and returned for the first time. The Panthers acknowledged Pysyk with a tribute on the scoreboard. ... Panthers F Noel Acciari (upper body) was scratched.

The two teams meet again on Wednesday and close out the three-game set Thursday.