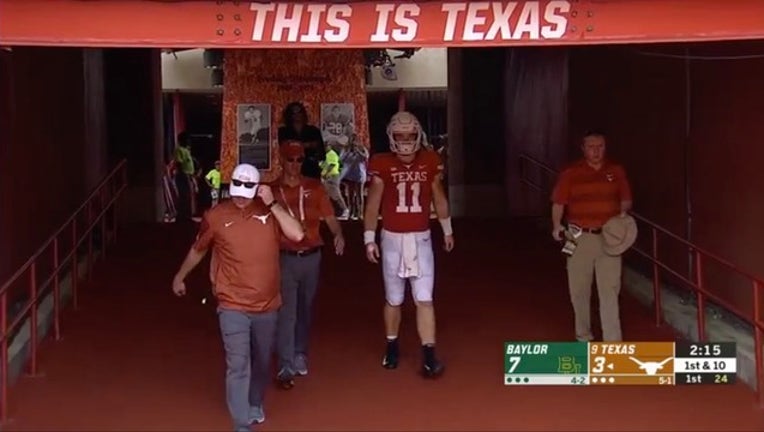 AUSTIN, Texas (AP) - Shane Buechele came on for injured quarterback Sam Ehlinger early in the first quarter and No. 9 Texas slugged out a 23-17 win over Baylor that ended when the Bears' final pass sailed through the back of the end zone Saturday.

Baylor quarterback Charlie Brewer drove the Bears from their own 3 to the Texas 17 before he had to rush his final three throws under intense pressure.

Buechele finished Texas' opening drive after game officials made Ehlinger leave because his right, throwing hand was bleeding. Ehlinger went to the sideline and then the locker room before school officials announced he had injured his throwing shoulder. He returned to the sideline but didn't play again and changed into street clothes.

Buechele was the full-time starter in 2016, when he set several school freshman passing records, but he hadn't played yet this season. The Longhorns struggled to find any offensive rhythm for most of the game as Buechele passed for 184 yards with one touchdown and one interception.

Texas is bowl eligible in mid-October for the first time since 2009, the last year the Longhorns won the Big 12 and played for a national championship.

Texas had consecutive losing seasons from 2014-16 and didn't get to the postseason in 2015 and 2016. The Longhorns have now qualified for bowl games in both of coach Tom Herman's seasons.

Baylor: The Bears couldn't protect Brewer late. They ended their last three drives with Brewer either sacked or on the run as the pocket collapsed around him. The Bears' defense, the worst against the run in the Big 12, had a solid game after giving up 300 yards on the ground a week earlier.

Texas: The Longhorns may be on edge waiting to see how serious Ehlinger's injury is and if next week's open date will give him time to recover before the next game. Ehlinger accounted for five touchdowns in a breakout victory over Oklahoma. He hasn't thrown an interception in 168 attempts, a school record. He also had played every snap this season until getting hurt.

Baylor is off next week before visiting No. 6 West Virginia on Oct. 25.

Texas is off next week before visitng Oklahoma State on Oct. 27.