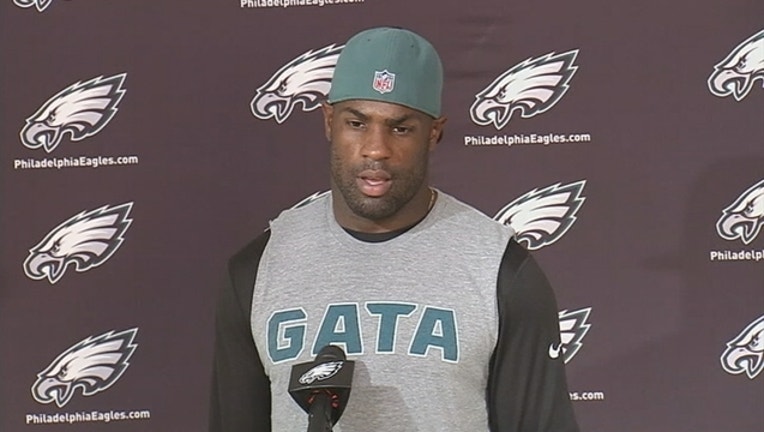 PHILADELPHIA (AP) — DeMarco Murray's debut with the Philadelphia Eagles did not go as expected.

Murray, who led the NFL in rushing last season while with the Dallas Cowboys, had just eight carries for 9 yards in Philadelphia's 26-24 loss to the Atlanta Falcons on Monday night.

Both the number of carries and yards were startling for a player who had 1,845 yards on 392 carries last season.

"It was a little surprising," Murray said after Wednesday's practice. "But we have a lot of weapons. A lot of individuals need to get the ball, as long as we're winning, I'm fine with it."

The Eagles didn't win, and the running game was a major factor.

Murray was held to 9 yards. Ryan Mathews, the No. 2 back, carried three times for just 4 yards and was stopped for no gain on a third-and-1 in the fourth quarter.

Only Darren Sproles, who is supposed to be more of a receiving back, had a good day running. He had 50 yards on five carries.

"We all have to be on the same page," Murray said. "Atlanta did a good job against the run, bringing an extra defender up in the box at times. We have to do a better job, make some adjustments.

"We're not going to freak out and change a bunch of things. We believe in what we're doing and that we have the right players and the right coaches to get the job done. We'll learn from it and get better from it."

Murray said he understood. He just doesn't want it to become a habit.

"It was a little tough," he said. "But there were good things going in the passing game that brought us back and were obviously working. But you want to get as many rushes as possible, get your hands on the ball."

He faces his former team, the Cowboys, on Sunday. Does he think he'll get the ball more then?

NOTES: The Eagles signed center-guard Julian Vandervelde, who was among their final cuts, to the 53-man roster to replace center David Molk, who was placed on injured reserve with a torn pectoral muscle, on Tuesday. ... Wide receiver and special teams player Seyi Ajirotutu (concussion) was the only player out of practice Wednesday.