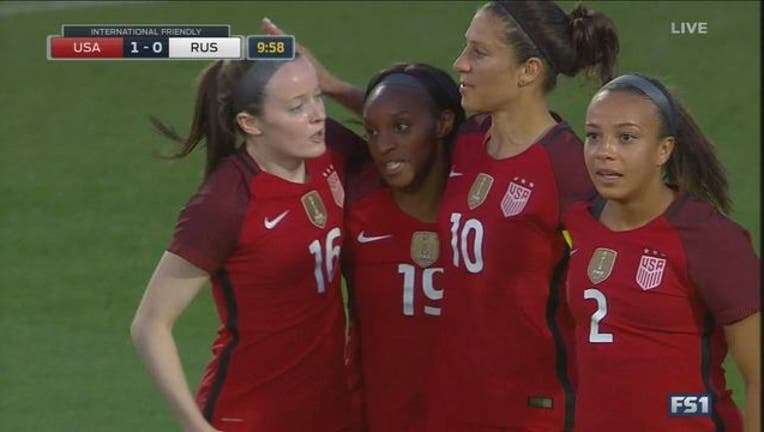 FRISCO, Texas (AP) - Crystal Dunn scored twice on the same field where she tied a national team record with five goals in a game last year and the U.S. women rolled to a 4-0 exhibition victory over Russia on Thursday night.

Allie Long also scored two goals to give her five for her national team career - all on headers - as the U.S. celebrated with an easy win a day after the announcement of a new labor deal that will cover the 2019 World Cup and 2020 Tokyo Olympics.

Dunn opened the scoring on Carli Lloyd's 55th career assist for the national team, then added an unassisted goal for a 3-0 lead in the 41st minute. A little more than a year ago, she scored five goals in a 10-0 win over Puerto Rico in a CONCACAF qualifier for the Rio Olympics at the home of MLS' FC Dallas in suburban Dallas.

The latest tallies gave Dunn 20 goals in 49 career caps for the U.S., which is second in the world rankings behind Germany.

Rose Lavelle had her first career assist on Long's first header, and Mallory Pugh assisted on the second.

Alyssa Naeher recorded her eighth shutout in her 11th career start for the United States.