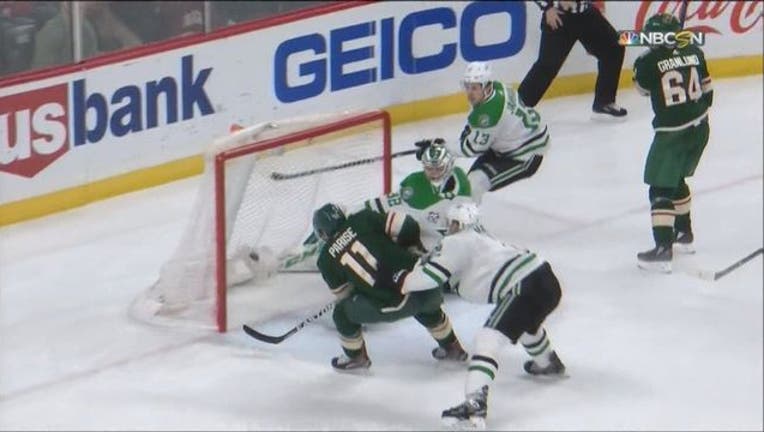 ST. PAUL, Minn. (AP) - Matt Dumba scored on a power play and had two assists in Minnesota's three-goal second period, and the Wild moved a step closer to a spot in the playoffs with a 5-2 victory over the fading Dallas Stars on Thursday night.

Mikael Granlund sparked the Wild with a short-handed goal in the first period, set up by the first of two assists by Ryan Suter. Zach Parise scored 59 seconds after Dumba and tacked on an empty-netter in the waning seconds, and Jason Zucker had a power-play goal with 11 seconds left before the second intermission to give the Wild a bigger cushion at the break.

Jamie Benn and Devin Shore scored for the Stars, who have lost eight straight road games, including six in regulation. They're just 1-7-2 in their past 10 games overall, staggering into position for the knockout punch to their postseason hope. They host a rematch with the Wild on Saturday night.

With only four games remaining, the Stars are five points behind current wild-card spot holders St. Louis and Anaheim in the Western Conference standings. The Blues have six games left, and the Ducks play five more times. The Stars also trail ninth-place Colorado by four points, with five games to go for the Avalanche.

Devan Dubnyk stopped 29 shots for the Wild, who improved to 26-6-8 at home for the second-most points in the NHL. With five games to go, they're up six points on the Avalanche in the race to clinch an appearance in the playoffs for the sixth straight year.

Tyler Seguin seized a turnover in the corner and set up Benn in the slot for the lead less than three minutes into the game. Then a high-stick double minor penalty on Wild defenseman Ryan Murphy turned the tide.

Granlund got loose up the right wing and sniped a shot past Keri Lehtonen to tie the game just 12 seconds into the 4-minute power play, the 10th short-handed goal allowed by the Stars to match the second-most in the league this season.

Dumba, who set a career high with his 12th goal, and Zucker gave the Wild's power play a badly needed boost. They had only one goal in their previous 26 opportunities until the sizzling second period. Dumba tied his career high with three points in that period.

Wild defenseman Jared Spurgeon, who has missed the past seven games with a torn right hamstring, could start skating next week, coach Bruce Boudreau said before the game. .. The Stars fell to 2-23-2 when trailing after two periods. ... Suter stretched his career high and franchise record to 45 assists. ... Stars defenseman Stephen Johns left with an upper body injury in the first period. ... Zucker has three goals and two assists in three games against the Stars this season. ... Granlund scored for the first time in 15 games since Feb. 27. ... Seguin has 27 points in 23 games against the Wild. ... Announced attendance was 19,350, the largest of the season for the Wild.

Stars: After the rematch with Minnesota, Dallas must wrap up the schedule on the West Coast with games at San Jose, Anaheim and Los Angeles.

Wild: Following the quick trip to Dallas, Minnesota plays its final regular season home game on Monday against Edmonton. Then the Wild finish the schedule with the same three California road games the Stars have, against the Ducks, Kings and Sharks.