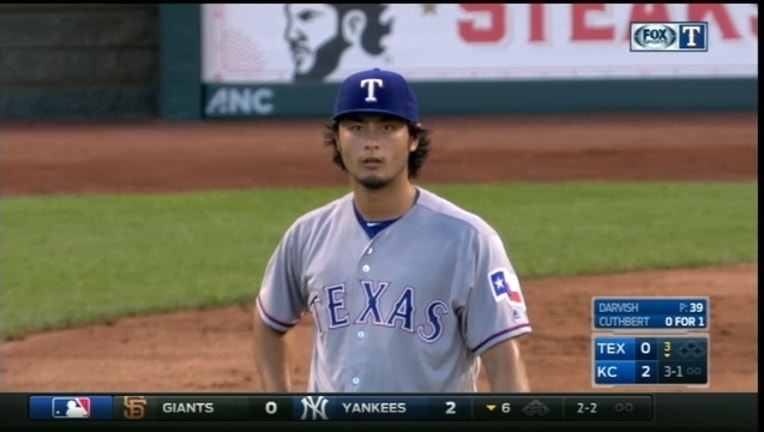 The only run Duffy (6-1) allowed came on Rougned Odor's homer in the fourth inning. The left-hander struck out four and walked two on a steamy evening where the heat index at first pitch was 108 degrees.

Luke Hochevar wiggled out of Duffy's jam to end the seventh, Kelvin Herrera pitched a perfect eighth and Wade Davis worked around a two-out single in the ninth for his 21st save.

The victory, one day after the Royals (48-47) visited the White House to celebrate their World Series title, kept them from dropping below .500 for the first time since beating Boston on May 17.

Darvish (2-2) nearly matched Duffy in his third start off the disabled list. He allowed single runs in each of the first three innings, struck out 11 and made only one big mistake — Cheslor Cuthbert's home run.

Still, it wasn't good enough to keep the AL West-leading Rangers from losing for the eighth time in nine games. The slide has been marked by poor pitching, inconsistent hitting and a series of devastating injuries — sluggers Prince Fielder and Shin-Soo Choo went on the DL earlier this week.

Without them, the Rangers certainly struggled to create scoring chances Friday night.

Duffy carved through the lineup without allowing a hit the first time through, the only baserunner a walk to Elvis Andrus. He went on to load the bases on a single and hit batter in the third inning, but Duffy calmly struck out Ian Desmond on three pitches to leave them stranded.

His only other trouble came when he put runners on the corners with two outs in the seventh, forcing Hochevar in from the bullpen. He got pinch-hitter Mitch Moreland on a liner to preserve a 3-1 lead.

They built it in typical Royals fashion: They scored a run in the first on a single, stolen base, error and groundout then scored again in the second on a walk, stolen base and consecutive singles.

It wasn't until Cuthbert went deep leading off the third that they made Darvish look fallible.

Rangers: Fielder will see neck specialist Dr. Drew Dossett on Monday. The DH/1B is facing the prospect of season-ending neck surgery after an MRI earlier this week revealed a herniated disk near an area that was repaired two years ago. Dossett also performed that procedure.

Royals: CF Lorenzo Cain (left hamstring strain) hoped to begin a rehab assignment his weekend, but it has been pushed back to early next week. He's been on the DL since June 29. "He was pushing it too hard two days ago and just kind of fatigued his leg," Royals manager Ned Yost said. "Not a setback by any stretch."

Rangers LHP Cole Hamels, who tossed eight sharp innings in a win over the Cubs his last time out, makes his first career start at Kauffman Stadium on Saturday. He faces Royals RHP Yordano Ventura.