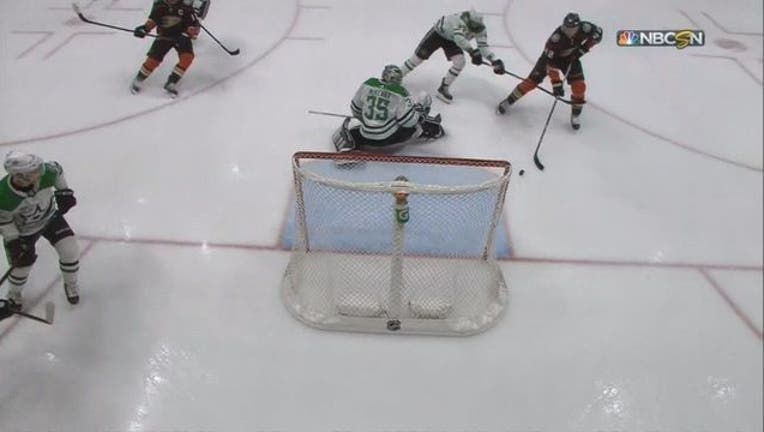 ANAHEIM, Calif. (AP) - Jakob Silfverberg had a goal and two assists, and the Anaheim Ducks kept up their surge toward the postseason with their ninth win in 11 games, 5-3 over the Dallas Stars on Friday night.

Josh Manson and Andrew Cogliano each had a goal and an assist for the Ducks, who leapfrogged the Los Angeles Kings by one point for third place in the Pacific Division. The playoff-bound rivals have been trading the spot down the stretch, and the race will go down to the last day of the regular season.

Anaheim clinched its sixth consecutive playoff berth Wednesday, but it can't let up heading into its finale at Arizona on Saturday night. The Ducks and the Coyotes will begin about 90 minutes before the Kings host the Stars.

What's more, if the Ducks win and the San Jose Sharks lose in regulation to Minnesota later in the night, Anaheim will jump into second place in the Pacific.

Rickard Rakell and Derek Grant also scored for Anaheim before Cogliano got a key breakaway goal with 5:25 to play. The Ducks finished the regular season with seven consecutive victories at Honda Center, where they've lost in regulation just once since Jan. 23.

Ryan Miller made 23 saves to win his second straight start in place of John Gibson. Miller also earned the 369th victory of his NHL career, tying Tom Barrasso for second among U.S.-born goaltenders.

Jamie Benn had a goal and an assist for the Stars, who aren't going out quietly in their disappointing season. After beating playoff-bound Minnesota and San Jose in their previous two games, the Stars gave a scare to the Ducks before taking their 10th loss in 13 games.

Mike McKenna stopped 28 shots in his second appearance of the season for Dallas and the 34-year-old veteran's 25th NHL appearance of his lengthy hockey career.

Silfverberg and Rakell scored in a strong first period for the Ducks, but Methot kept it close for Dallas with his first goal in 35 games this season.

Manson scored on a rebound early in the second period, getting the seventh goal of the defenseman's standout season.

Benn caught the Ducks in a change and found room to put a stoppable shot past Miller early in the third period, trimming Anaheim's former three-goal lead to 4-3. The goal was the 33rd of the season for the Dallas captain.

NOTES: During a first-period break, Honda Center aired a tribute video to Francois Beauchemin. The veteran Ducks defenseman has said he will retire after this season. Beauchemin, who has played three separate stints in Anaheim during his career, acknowledged his standing ovation with a wave. ... Ducks D Cam Fowler missed his second straight game with a shoulder injury that could sideline him deep into the playoffs. Gibson also missed his second straight game with an upper-body injury, but it isn't thought to be serious. ... Rakell's 33rd goal of the season matched his career high and also ended Anaheim's 0-for-10 power play drought.

Ducks: At Arizona Coyotes on Saturday.