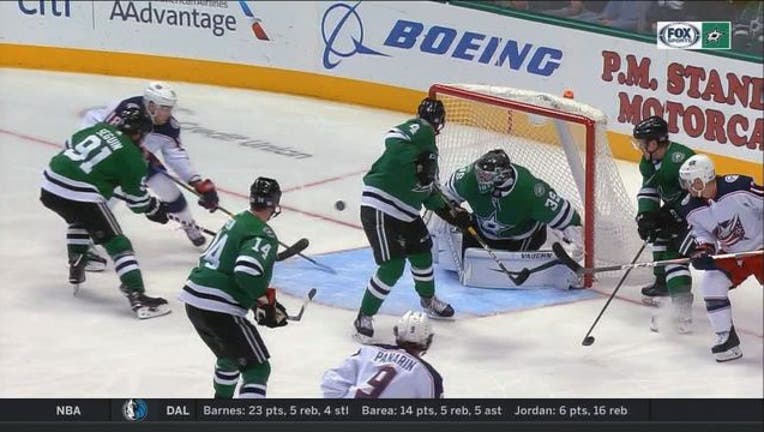 Dubois took a pass from Cam Atkinson behind the net and backhanded the puck under the crossbar with 9:39 left for his eighth goal.

Atkinson had scored the game's first goal in the second period.

Alexander Radulov, who returned to the Stars' lineup, tied the game in the second period.

The Blue Jackets extended their points streak to five games (3-0-2) and are two points ahead of the New York Rangers in the Metropolitan Division. Columbus has won its last seven games against the Stars.

Each team had entered the game with a 9-6-2 record.

Columbus goalie Sergei Bobrovsky and Dallas' Khubodin each had 26 saves.

The first period ended scoreless. Columbus killed all three Stars penalties and held Dallas to one shot on goal with the man advantage, while building a 10-9 edge on shots for the period. The Stars' only penalty in the first was a major to Jamie Benn for a fight with Columbus forward Josh Anderson.

It didn't take long for the Blue Jackets to get their first power play and a 1-0 lead. At 1:29 of the second period, 25 seconds after Benn went off for slashing, Atkinson took a pass from Seth Jones at the top of the right faceoff circle and sent a wrist shot past Khubodin.

Columbus dominated time of possession in the second, but the Stars blocked 15 shots in the period and tied the game 1-1 at 18:20 when Radulov put a wrist shot from the right circle into the upper left of the net.

It was Radulov's sixth goal in eight games. He had missed 10 of the previous 11 games because of a lower-body injury.

The Blue Jackets had a chance to take the lead midway through the third period when Dubois took a cross-ice pass for a wrist shot, but Khubodin slid across the goal mouth for a skate save.

NOTES: Stars C Devin Shore (lower-body injury) left the game in the first period and didn't return. Dallas RW Brett Ritchie (upper-body) played for the first time in five games. . D Julius Honka had four of the Stars' blocked shots in the second. . Blue Jackets D Seth Jones returned home for the game. He was born in nearby Arlington, Texas. A spectator who spent eight years in Arlington was former Texas Rangers pitcher Derek Holland, now with the San Francisco Giants but still a Stars season-ticket holder. Holland is from Heath, Ohio, near Columbus.

Stars: Complete a four-game homestand on Friday against Boston.