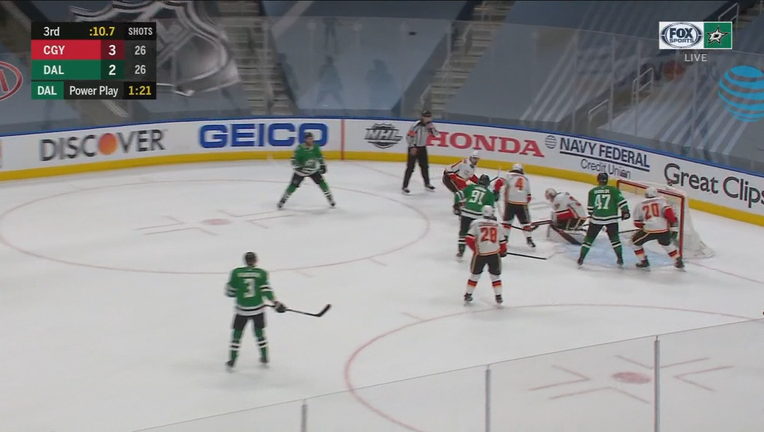 EDMONTON, Alberta - Rasmus Andersson snapped a tie after Dillon Dube scored twice in the first period for the confident Calgary Flames, who beat the Dallas Stars 3-2 in Game 1 of their best-of-seven Western Conference playoff series Tuesday.

“It feels good. You can feel the chemistry in the room and the trust between the guys,” Flames defenseman TJ Brodie said. “It definitely feels different than previous years."

Andersson scored on a rush with four minutes left in the second period, with the defenseman taking a strong shot and the puck skirting over the top of defenseman Andrej Sekera's stick blade on its way to the net.

“I saw a little angle and I just went for the shot and luckily it went in,” Andersson said.

After outscoring the Winnipeg Jets 16-6 to win their best-of-five qualifying round in four games, the Flames jumped ahead in this series before back-to-back games. Game 2 is Thursday, with Game 3 the next night.

Cam Talbot stopped 24 shots for the Flames, including a power-play attempt by Joe Pavelski with 10 seconds left in the game.

Dallas already had an extra skater on the ice after sending goalie Anton Khudobin to the bench, and then had a 6-on-4 advantage because of a mistake by captain Mark Giordano. The 36-year-old defenseman, who has spent all 14 of his NHL seasons with the Flames, got a delay of game penalty after knocking the puck out of play when trying to clear it with 49 seconds left.

But Dallas got only one shot on goal in that final stretch, the attempt by Pavelski, whose goal with 31 seconds left pushed the Stars into overtime Sunday when they won their last game in the round robin among the conference's top four seeds.

“The last 50 seconds, I thought we battled really hard and we got away with it,” Andersson said.

Khudobin, who in 10 NHL seasons had never started a postseason game before last week's round-robin play, had 23 saves.

Dallas went 1-2 in the round robin with the win coming Sunday in a shootout against St. Louis after Pavelski's late tying goal. While the Stars were playing last week without the worry of elimination, the Flames were winning a series to advance to the playoffs.

“We've been talking about this for a while, that’s when this playoffs started we were going to be playing a team that basically had won a playoff round and it was playoff ready," Stars coach Rick Bowness said. “That team is a very confident team right now. So we were half a step behind early and it cost us."

The Stars, the third seed, tied the game by scoring twice on long shots in a nine-second span of the second period. It was the quickest they had ever scored two goals in a playoff game, the previous mark being two goals in 12 seconds during Game 1 of the 2000 Stanley Cup Final.

Denis Gurianov, a rookie who led Dallas with 20 goals during the regular season, scored on a shot that deflected off the hip of a defenseman and past Talbot with 9:08 left in the second. Stars captain Jamie Benn then sent another puck toward the net from the blue line, with Alexander Radulov between him and the net, for the tying score.

Calgary got its first goal after Radulov was sent off midway through the first period for a questionable penalty for interference, when he appeared to be trying to avoid traffic near center ice.

Dube converted a one-timer from the right circle off Milan Lucic's power-play pass across the ice past two Stars. Dube had another shot up close into the chest of Khudobin, but did score again late in the period on a charge toward the net.

Dube made a rush with the puck, getting around one defenseman and then splitting between another one just in front of Khudobin before the shot that gave the Flames a 2-0 lead.

“I came through with some speed. At that point, I just wanted to challenge him," Dube said. “And luckily enough, I got to step on him."