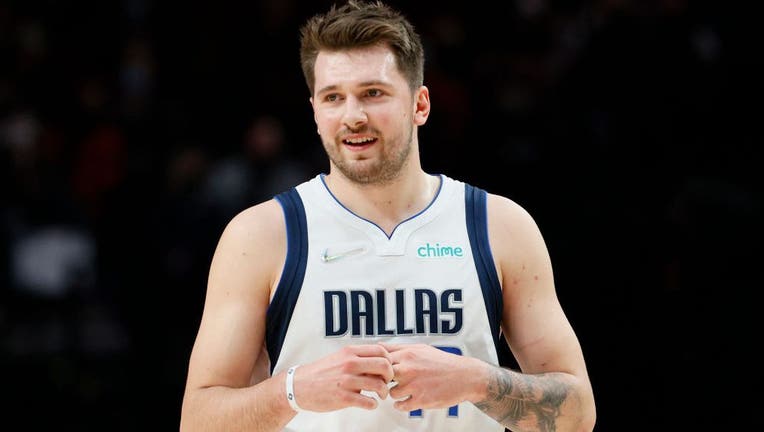 PORTLAND, OREGON - JANUARY 26: Luka Doncic #77 of the Dallas Mavericks reacts during the first quarter against the Portland Trail Blazers at Moda Center on January 26, 2022 in Portland, Oregon. Photo by Steph Chambers/Getty Images)

PORTLAND, Ore. - Luka Doncic had 15 points, 10 rebounds and 15 assists for his sixth triple-double this season, and the Dallas Mavericks led wire-to-wire in a 132-112 victory over the Portland Trail Blazers on Wednesday night.

It was Doncic's franchise-leading 42nd career triple double. He's one away from matching Fat Lever for 10th on the NBA all-time list.

"Everything starts with Luka Doncic," said Kristaps Porzingis, who had 22 points for the Mavs. "Everything becomes much easier with him on the court."

Jalen Brunson added 20 points and 11 assists for Dallas, which led by as many as 23 points and had seven players finish in double figures.

Both teams were playing the second game of a back-to-back. The Mavericks fell 130-92 to the Golden State Warriors on Tuesday night — a loss that stung because Tim Hardaway Jr. fractured a bone in his left foot during the second quarter.

There is no timeline for Hardaway's return, the team said Wednesday. Coach Jason Kidd said that while the team will miss Hardaway, who was averaging 14.2 points off the bench, "we've got some guys over there who want to play so this is a good time for them."

The Blazers were coming off a disheartening 109-107 loss to the Timberwolves on Tuesday night, in which Portland led for the better part of three quarters, but ultimately fell short.

"Sometimes the schedule can help you or hurt you," Kidd said. "This time it helped us by having a game where we didn’t have to sit around and look at each other after last night's performance."

Doncic's deep 3-pointer put the Mavericks up 30-15 and Dallas held a 40-25 lead after the opening quarter.

The Mavericks stretched the lead to as many as 18 points but the Blazers closed the gap to 65-58 late in the half on Jusuf Nurkic's layup.

Porzingis had 14 points in the first period alone, matching his high for a quarter this season.

"We just wanted to make sure we were the ones to come out and punch, and that’s what we did early on and it kind of set the tone for the rest of the game," Porzingis said.

The Blazers pressured Dallas in the third quarter. Simon's dunk off a lob from McCollum got Portland within 78-74 — but that was as close as it got. Dallas led 98-81 going into the fourth quarter.

"I think guys are fighting and competing hard, whether there’s mistakes or not. We’re trying to be aggressive. We’re trying to figure it out, and we’re going to continue do that and play the right way, and live with the results," said Norman Powell, who finished with 19 points for Portland.

The Blazers' defense was hurt by the absences of Nassir Little (shoulder) and Robert Covington (right knee).

"We missed them a ton," Blazers coach Chauncey Billups said. "Got off to such a tough start. You give up 40 points in the first quarter, it's really tough to absorb that type of quarter. But I thought we came back in the second quarter and we got back in it. Just fighting uphill all night."

Mavericks: It was the second of three meetings between the two teams this season. Dallas won the first, 132-117 on Dec. 27.

Trail Blazers: Powell started against the Mavs after his minutes were limited the night before. Powell missed the previous eight games because of COVID-19 protocols and undisclosed personal matters.