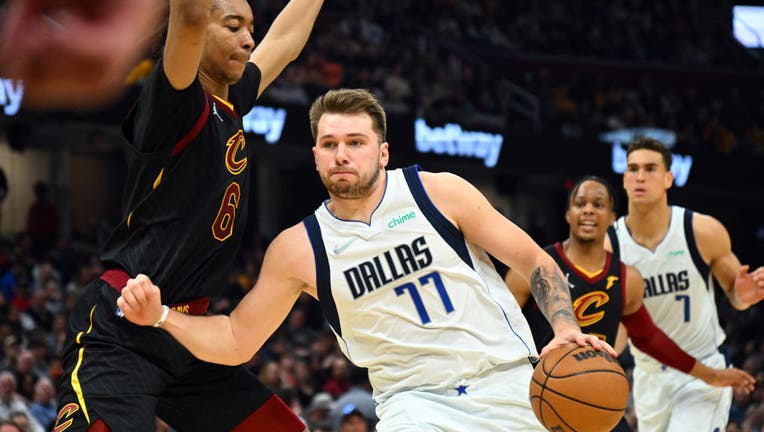 CLEVELAND (AP) - With a large, loud contingent of Slovenia fans on hand, Luka Doncic wanted to give his countrymen a show.

The Cavaliers couldn't stop it.

"When all the people come to see you, you want to put on a show," Doncic said.

Doncic scored 35 points, added 13 assists and just missed another triple-double, leading the Dallas Mavericks to a 120-112 win on Wednesday night over the Cleveland Cavaliers, who were without star rookie forward Evan Mobley.

Dorian Finney-Smith added a career-high 28 points — many of them off passes from Doncic — for Dallas, which came in fourth in the Western Conference and locked up one of the top six playoff spots.

Doncic scored 20 with ease in the third, when the Mavericks took control by outscoring the Cavaliers 39-22.

With Cleveland still hanging around in the fourth, the do-it-all All-Star forward, who finished one rebound short of his second triple-double in two nights, put the Cavs away with a deep, dagger 3.

"We talked about there being a large Slovenian contingent in Cleveland on the plane," Mavericks coach Jason Kidd said. "He wanted to put on a good show and came to work. He comes to work every night.

"He knew when to pass the ball and when to attack. Luka will have two (guys) on the ball and he trusts his teammates to make plays."

Caris LeVert had his best game with Cleveland, scoring 32 points. Darius Garland added 25 points and 10 assists for the Cavs, who have dropped four of five and are trying to hang onto a home game in the play-in tournament amid some major injuries.

Mobley, one of the Rookie of the Year frontrunners, missed the game with a sprained ankle suffered Monday night and will miss at least two more.

One of the game's most complete players, Doncic dominated in the third to help the Mavericks erase a six-point halftime deficit and take an 11-point lead into the fourth.

Doncic did it almost effortlessly as the Cavs couldn't figure out how to stop him from splitting high screens and driving down the lane for either a short bank shot or an assist to an open teammate.

Dallas closed the third with a 15-2 run, highlighted by Doncic feeding Finney-Smith with a behind-the-back pass for a 3-pointer.

"He's a wizard with the ball in his hands."

Mobley's loss is a huge blow at the worst possible time for the Cavs. He will not travel to Atlanta and New York in the next few days so he can get more treatment and hopefully be back for the final few games.

Bickerstaff said Mobley's not in a walking boot, perhaps an encouraging sign the injury isn't long-term.

The Cavs have been forced to maneuver around injuries all season, and because of that Bickerstaff was confident his players would respond.

"It's a test of character and that our guys have passed time and time again," he said. "Our guys don't quit."

Another positive for Cleveland was LeVert, who has struggled with his role and confidence since coming to the Cavs in a deadline trade.

"This is who Caris is," Bickerstaff said. "It was just a matter of time."

Cavaliers: Allen has missed 12 games since getting hurt on March 6. ... G Rajon Rondo (sprained ankle) was downgraded from doubtful to out and was sidelined for his ninth consecutive game. ... C Moses Brown made his first start with Cleveland and had 12 points and nine rebounds in 21 minutes.

Cavs forward Kevin Love and Mavs center Boban Marjanovic are among the 12 finalists for Twyman-Stokes Teammate of the Year Award.

A year ago, it would have been impossible to imagine Love being considered. He was frustrated and vented toward teammates on the floor more than once. But he’s changed and his turnaround has had a major impact on Cleveland’s success.

"He’s a guy who has truly been supportive of the guy (Mobley) he had to pass the torch to, and in sports that’s not always the case," Bickerstaff said. "Not too many people at his level are willing to sacrifice the way he has."

As for the 7-foot-4 Marjanovic, Kidd said he’s never seen the big man have a bad day.

"I hope he wins," Kidd said, "because he deserves it."

The Cavaliers are making a subtle but strong change to their jerseys for next season. The team expanded its partnership with Cleveland Cliffs and will wear the local steel company’s logo. It will replace Goodyear’s iconic Wingfoot logo, which the club has had for five seasons.