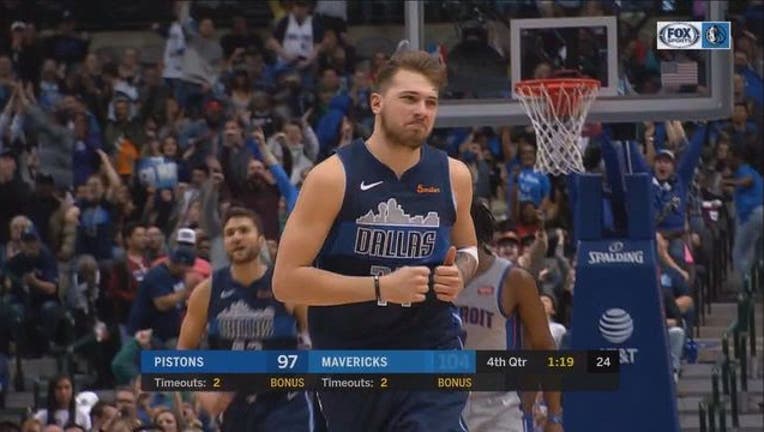 Griffin scored 35 for his eighth 30-point game in the past 11, but couldn't put the Pistons in front when trying to back down Kleber. After Griffin's attempt to save the ball inbounds was collected by Doncic, the 19-year-old rookie found Kleber alone at the 3-point line.

Initially, Kleber's fourth 3 gave Dallas a 100-97 lead, but the score changed to 100-95 on the subsequent timeout. The Pistons lost two points when Andre Drummond's basket more than two minutes earlier was overturned on review by a shot-clock violation.

Detroit had a chance to tie when Stanley Johnson missed a 3-pointer, and DeAndre Jordan dunked over fellow 6-foot-11 center Drummond for the second time, this one on an assist from Doncic, who had eight rebounds and eight assists.

Kleber's fourth and final block came on a dunk attempt by Drummond, and Doncic hit a fadeaway jumper for his fifth 30-point game and a 104-97 lead with 1:18 remaining. Dallas took the first of two meetings in a week between teams that came in with matching 21-26 records.

Drummond, who returned after missing three games while in the concussion protocol, got the better of Jordan in the battle of the NBA's top two rebounders and two of the league leaders in double-doubles, but Jordan made the clutch plays late.

Griffin finished his scoring with a spectacular dunk in the final minute, but after a miss by Doncic, the Pistons were too slow trying to get a shot. Reggie Jackson's missed 3 with less five seconds remaining secured Dallas' 18th win in 24 home games.

Dennis Smith Jr., in his second game back with Dallas after a week away from the team amid trade talk, scored 11 of his 19 points in the first quarter. Kleber finished with 12 points.

Pistons: Griffin scored 15 straight points in the second quarter before a put-back dunk by Drummond. ... Jackson was the other double-figure scorer with 12 points on 4-of-14 shooting and had nine assists.

Mavericks: Kleber made his first three 3s in the first half and finished 4 of 7 from long range. ... The Mavericks were more accurate on 3-pointers than free throws in the first half, going 9 of 20 from long range (45 percent) and 5 of 13 from the line (39 percent). ... Dirk Nowitzki, in his record 21st season with just one franchise, didn't score in 10 minutes.

Mavericks: Toronto at home on Sunday in the second of seven straight games against Eastern Conference teams.