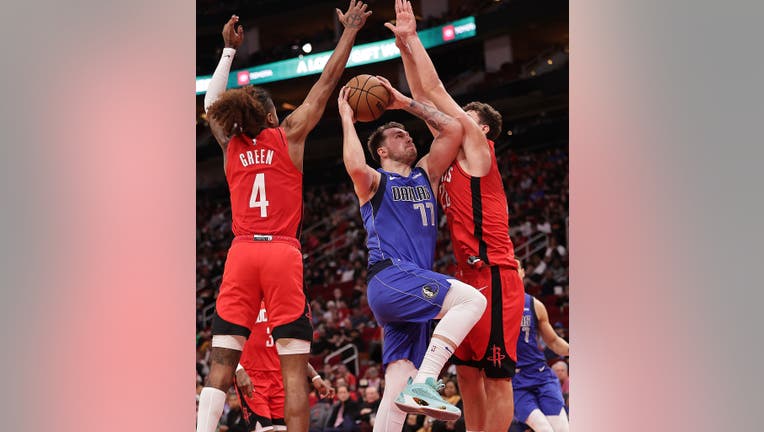 HOUSTON, TEXAS - JANUARY 02: Luka Doncic #77 of the Dallas Mavericks is met by Alperen Sengun #28 of the Houston Rockets and Jalen Green #4 as he drives to the basket during the fourth quarter at Toyota Center on January 02, 2023 in Houston, Texas. (

HOUSTON - Luka Doncic had 39 points, 12 rebounds and eight assists as Dallas rallied from an 18-point second half deficit to beat the Houston Rockets 111-106 on Monday night for the Mavericks’ seventh straight win.

Doncic scored 29 of his points in the second half to lead the comeback. He finished 10 of 26 from the field, including 1 of 9 on 3-pointers and hit 18 of 22 from the free throw line.

Doncic has scored at least 32 points in each of the last six games, including three 50-point games during that span.

"Winning is always great," Doncic said. "The energy in the locker room is amazing, so to win seven in a row is pretty good, but we want more. I think today we played very bad, but great teams come back and win games."

Christian Wood added 21 points, and Tim Hardaway Jr. scored 21 points for Dallas, which has their longest winning streak since the 2010-11 season.

"We were getting our shots," Porter said. "There were a couple missed plays, but that what happens. It’s been a long game. It’s the fourth quarter, trying to execute, trying to get shots in, and it just didn’t turn our way."

"I thought we did a good job on him the whole game," Houston coach Stephen Silas said of the defense against Doncic. "The issue was the fouls. I don’t have enough money to get fined, so I will stop there."

Trailing 100-93 midway through the fourth, Dallas answered with 14-4 run to take a three-point lead on a jumper by Hardaway with 2:55 remaining.

Houston cut the lead to one on a layup by Porter with two minutes left, but after trading missed shots, Spencer Dinwiddie hit a jumper with 10 seconds left to up the lead to 109-106. Sengun missed two free throws, and Doncic grabbed the rebound. Doncic was fouled and made two free throws to ice the game.

After a sluggish first half in which he scored 10 points on 3 of 12 shooting, Doncic heated up in the third quarter, scoring 19 points as the Mavs cut an 18-point Houston lead down to 87-83 at the end of the quarter on a three-point play by Doncic.

Rockets: Jae’Sean Tate (right ankle) is "getting closer", Silas said, adding that he would like to see Tate go through a five-on-five practice before he returns. … Jabari Smith Jr. had 11 points.

Following postgame comments from Gordon on Friday that he’s seen no improvement from the Rockets since the beginning of the season, Silas said he and Gordon had talked on Monday and knew where each other stood.

"Rebuilding is hard," Silas said. "It’s hard on everybody. … He was frustrated. I don’t necessarily agree with how he went about it, but I do understand his frustration."

Mavericks: Host the Celtics on Thursday.