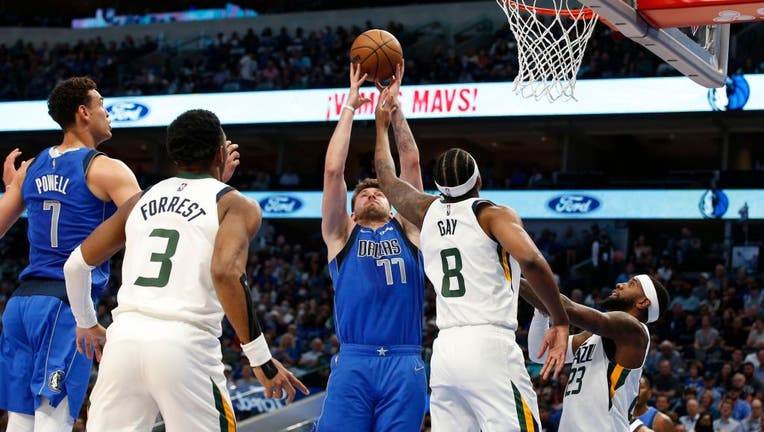 DALLAS, TEXAS - MARCH 27: Luka Doncic #77 of the Dallas Mavericks grabs a rebound against Rudy Gay #8 of the Utah Jazz at American Airlines Center on March 27, 2022 in Dallas, Texas. (Photo by Tim Heitman/Getty Images)

DALLAS - Luka Doncic knows the Mavericks haven't had home-court advantage in the playoffs since the young superstar came to Dallas.

Coach Jason Kidd might remember the last time the club did, since he was the point guard on the team that won the 2011 championship.

The Mavericks took an important step toward the elusive top half of the Western Conference playoff picture Sunday night.

Doncic scored 32 points and the Mavericks beat the Utah Jazz 114-100 for the inside track to the fourth seed in what could be a first-round playoff matchup.

The Mavericks (46-29) moved a game ahead of the Jazz (45-30) in the battle for the fourth and fifth seeds in the West and earned a split of the season series, with the home team winning all four games.

Dallas would have to finish a game ahead of Utah if the Jazz keep their Northwest Division lead over Denver. The Mavericks and Jazz have seven games remaining.

"That's what we wanted, but it's a long way to go," Doncic said. "We've still got to keep our composure, focus on the next opponent and try to win every game."

Rudy Gay scored 18 points for the Jazz, who lost their fourth in a row on a season-long, six-game trip that ends Tuesday night in Los Angeles against the Clippers.

Defensive stalwart Rudy Gobert was a late scratch for Utah because of the 7-foot-1 center's right leg contusion as another 7-footer, Hassan Whiteside, sat for the second consecutive game with a right foot sprain.

Bojan Bogdanovic was out for the ninth time in 10 games as he battles a right calf strain, and Utah had a scare in the third quarter when Donovan Mitchell left the game briefly after Dwight Powell landed on his lower right leg.

Mitchell stayed down in front of Utah's bench as play continued at the other end and limped to the bench when he finally got up. But Mitchell missed less than a minute and a half, finishing with 12 points on 4-of-13 shooting.

"Most of their team wasn’t playing, so you can’t judge," Kidd said. "We had a Christmas game out there without half our team. You only will be judged once the playoffs start. This wasn’t a playoff game. No one’s up 1-0."

Doncic beat the halftime buzzer with a longer 3-pointer to get the Mavericks within a point and set up a second-half surge as Dallas won for the 18th time in 22 home games.

Reggie Bullock connected on a season-high seven 3-pointers, finishing with 23 points on 7-of-11 shooting beyond the arc. He had consecutive 3s in the middle of the fourth quarter to give Dallas its biggest lead to that point at 17.

"I thought Bullock's 3s were really big 3s," Utah coach Quin Snyder said. "You can't take all of them away. There's a few that were really impactful."

Jazz: Snyder said Whiteside has been playing through soreness and mentioned feeling it in a loss at Brooklyn last Monday. Whiteside played the next game in Boston. "It's a hard thing to predict, how long or how quickly," Snyder said of the outlook for Whiteside.

On the same weekend Villanova reached the Final Four, Brunson shared the floor with Utah's Eric Paschall, his teammate when the Wildcats won their second title in three years in 2018. Paschall made his third start of the season with Gobert out and scored 10 points. Jazz rookie Jared Butler, who scored seven points, was the point guard on Baylor's championship team last year.

Mavericks: The Lakers visit Tuesday before Dallas starts its final road trip of the regular season (four games) at Cleveland on Wednesday, the second night of a back-to-back.