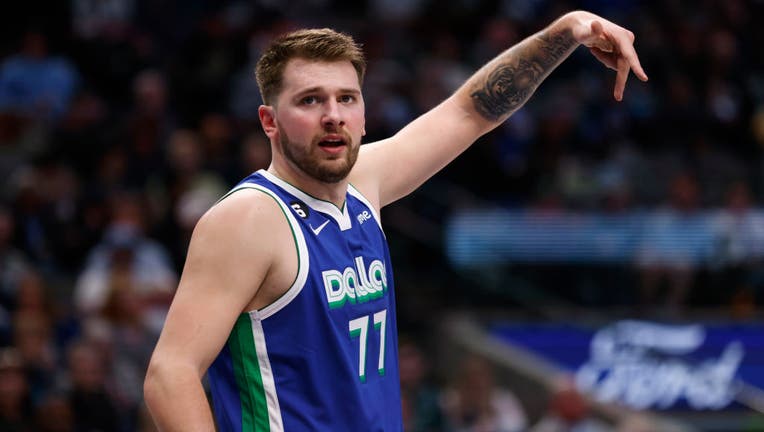 DALLAS, TX - NOVEMBER 29: Luka Doncic #77 of the Dallas Mavericks calls a play as the Mavericks take on the Golden State Warriors in the second half at American Airlines Center on November 29, 2022 in Dallas, Texas. NOTE TO USER: User expressly ackno

DALLAS - Tim Hardaway Jr. had to watch when his Dallas Mavericks lost to the Golden State Warriors in last season's Western Conference finals.

He found himself in the middle of some playoff intensity in their first meeting this season.

Hardaway hit a go-ahead 3-pointer late, Luka Doncic scored 41 points in his NBA-leading fifth triple-double and the Mavericks held off the Warriors 116-113 on Tuesday night.

Dallas ended a four-game losing streak, the longest in two seasons under coach Jason Kidd. Golden State, a winner in five games last spring on the way to the title, lost for just the second time in seven games after a slow start to its season.

"For me, it was," Hardaway, who missed the 2022 postseason recovering from a broken foot, said of whether he felt the playoff vibe.

"Just because of the excitement, and me not being able to play in the Western Conference finals. Just wanting to go out there and compete, have fun. Playing against the champs."

Stephen Curry scored 32 points for Golden State, including a quick-draw 3-pointer over Maxi Kleber for a 110-108 lead, but Dallas responded by scoring the next five points to go ahead for good.

"Hardaway’s shot was the key, I thought, down the stretch," Warriors coach Steve Kerr said. "We have to expect that teams are going to make shots against us. We’re going to be circled on every team’s calendar."

The Warriors were down two when Curry was called for traveling — the 10th of the game between both teams — with 10 seconds remaining.

"Bang, bang situation," Curry said. "Dumb play by me to not take the layup. I got a little confused on what the time and score was. Going for the hero shot. I didn’t think it was a travel to the point where let the play run out. But who am I to say?"

Golden State had one more chance after Dorian Finney-Smith missed one of two free throws to keep the deficit at three. Klay Thompson got a good look off for 3, but the shot was short as Curry's Splash Brother finished 1 of 6 from deep with five points.

Doncic also had 12 rebounds in his 51st career triple-double.

Jonathan Kuminga had 14 points and 10 rebounds for Golden State, which trailed by 17 in the first quarter but took its first lead before halftime.

Spencer Dinwiddie scored 14 points for Dallas before he was ejected for a flagrant-2 penalty when his elbow hit Jordan Poole in the face on an offensive foul early in the fourth quarter.

Hardaway's go-ahead shot was the last of six lead changes in the fourth quarter. After the Warriors took their biggest lead at 100-96, Doncic came back early in part because of Dinwiddie's ejection and started a 7-0 run with a 3. Thompson later put Golden State back in front with his only 3.

Warriors: Kuminga and Anthony Lamb had eight points apiece off the bench in the second quarter, combining to go 7 of 8 from the field. Lamb hit consecutive 3-pointers early in the quarter. Lamb scored 11. ... Draymond Green had his third consecutive double-figure game with 12 points. He had just two in the previous 11.

Mavericks: Four-time All-Star G Kemba Walker signed, but the timeline for him to play is uncertain. The club hopes to get him on the court for practice Wednesday. The 32-year-old with a history of knee issues was unsigned the first six weeks of the season. ... Josh Green scored seven of his 13 points in the fourth quarter.

Warriors: Chicago visits Friday to start a three-game homestand. The Warriors have a 10-game winning streak in the series.

Mavericks: A two-game trip starts Thursday in Detroit before the first meeting with former Dallas guard Jalen Brunson and the New York Knicks in a Saturday matinee game.