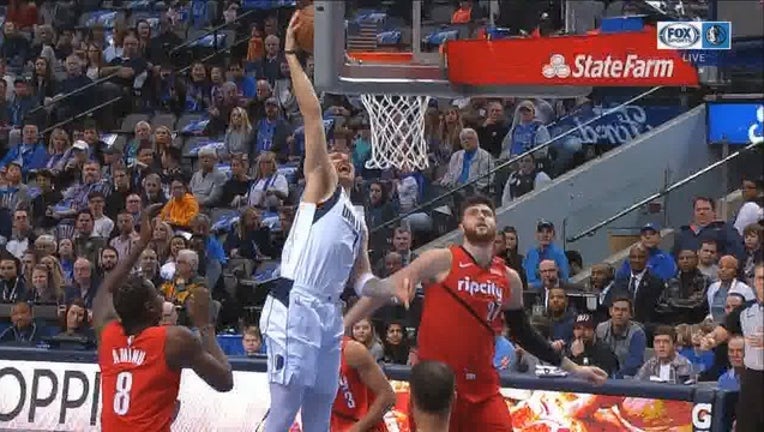 DALLAS (AP) - Luka Doncic scored 28 points, Tim Hardaway Jr. had 24 and the Dallas Mavericks erased a 15-point deficit in the fourth quarter to beat the Portland Trail Blazers 102-101 on Sunday.

Damian Lillard scored 21 of his 30 points in the last half of the third quarter to help the Blazers build a lead that grew to 96-81 early in the fourth before the Mavericks mounted their rally.

Dorian Finney-Smith started the comeback by tipping in his own miss, and Doncic's assist on Dwight Powell's alley-oop dunk kicked the recovery into another gear by getting Dallas within six. Doncic had nine rebounds and six assists.

After a 3-pointer from Doncic, Hardaway won a scramble for a loose ball along the sideline, and weaved through defenders for an emphatic left-handed dunk to get Dallas within one.

Doncic gave the Mavericks their first lead since early in the second quarter with a finger-roll layup, then put them ahead for good with a 3-point play on a driving layup for a 102-99 lead with 1:28 remaining.

After CJ McCollum made a shot, the teams exchanged misses before Lillard was off on a driving layup just before the buzzer.

Lillard hit eight straight shots and scored 16 straight Portland points during his third-quarter flurry, but missed his last four shots as the Blazers went more than 10 minutes in the fourth quarter without a basket.

Justuf Nurkic had 18 points and 10 rebounds before fouling out when Hardaway got the Mavericks even at 97-all on free throws. They had been even at 67 in the third before Lillard took over and gave the Blazers a comfortable lead.

Powell had 13 points and eight rebounds and Finney-Smith scored 11.

Blazers: McCollum was just 6 of 17 from the field and finished with 14 points, ending his career-best three straight games with at least 30 points. ... Seth Curry scored four points against his former team. The Mavericks had interest in bringing back Curry this season as a key 3-point threat after he missed the 2017-18 season with a stress fracture in his lower left leg.

Mavericks: C Salah Mejri was re-signed three days after being waived as part of the trade that sent Harrison Barnes to Sacramento. Dallas made the deal for salary-cap relief, acquiring Zach Randolph and Justin Jackson. Randolph was waived the day after the trade. Mejri wasn't active against Portland. ... Hardaway reached 5,000 career points with two buckets in the first quarter. His next two baskets were 3-pointers to give him 700 for his career.

Mavericks: At Houston on Monday night.