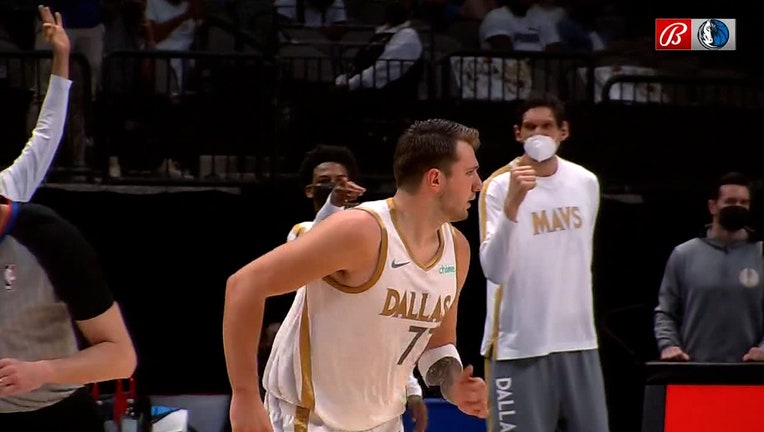 Dorian Finney-Smith scored 17 points as the Mavericks reached 10 games over .500 for the first time this season and moved a half-game ahead of the Los Angeles Lakers for the fifth seed in the West. Dallas holds the tiebreaker on the defending NBA champs.

Kevin Durant had 20 points and nine rebounds for the Nets with each team missing an injured star: James Harden for Brooklyn and Kristaps Porzingis for Dallas. In the Mavericks’ 115-98 win at Brooklyn in February, Harden played while Durant and Irving were out.

TAMPA, Fla. (AP) — Bradley Beal scored 14 of his 28 points in the fourth quarter and overtime Thursday night, and Russell Westbrook had his 34th triple-double of the season in Washington's victory that all but Toronto from the NBA’s play-in tournament.

Pascal Siakam matched his career high with 44 points for the Raptors. They lost for the fifth time in six games and fell four games behind the Wizards for the 10th spot in the Eastern Conference with five left to play.

Westbrook had 13 points, 17 rebounds and 17 assists before fouling out with 15.3 seconds left in overtime. The triple-double was the 180th of his career, leaving him one behind Oscar Robertson.

CHARLOTTE, N.C. (AP) — Nikola Vucevic had 29 points and 14 rebounds and Chicago breezed past Charlotte with Zach LaVine back on the floor for the Bulls.

LaVine returned from an 11-game absence due to the league’s health and safety protocols and scored 13 points on 5-of-11 shooting.

P.J. Washington, who missed Charlotte’s last game for the birth of his child, led the Hornets with 24 points on six 3-pointers.

INDIANAPOLIS (AP) — Caris LeVert scored nine of his 31 points in the final 2:17, and Indiana awoke from a recent funk to beat Atlanta.

The Pacers had dropped four of five, including one of the season’s ugliest losses Wednesday night in which they managed just 93 points at home against Sacramento’s NBA-worst defense.

Trae Young led the Hawks with 30 points and 10 assists.

Fighting Golden State for eighth place in the Western Conference, Memphis couldn’t take advantage of the matchup against lowly Detroit.