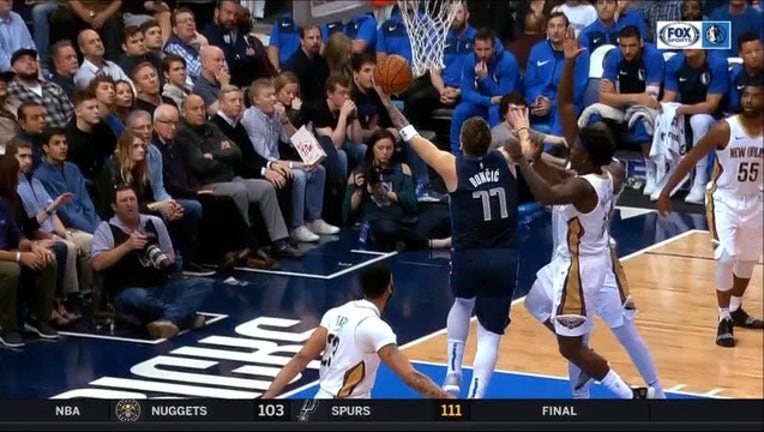 DALLAS (AP) - Luka Doncic scored 21 points, including the tiebreaking free throws with 30 seconds left, and the Dallas Mavericks ended a six-game losing streak with a 122-119 victory against the New Orleans Pelicans on Wednesday night.

The 19-year-old rookie made 11 of 12 free throws, including the last three points of the game in the final half-minute. He missed one of two after rebounding a miss on a 3-pointer from Anthony Davis, who had 32 points and 18 rebounds in the fifth consecutive loss for the Pelicans.

Davis missed another 3 with a chance to tie in the final seconds, and Doncic got the rebound again to finish one rebound shy of a triple-double. The Slovenian had 10 assists in the first of two straight games between these teams.

DeAndre Jordan had 20 points on 7-of-7 shooting and 12 rebounds for his 22nd double-double.

The backup guard duo of J.J. Barea and Devin Harris carried the Mavericks through most of the fourth quarter. Barea had 11 of his 18 in the final quarter, including 3-of-3 shooting on 3-pointers, and Harris scored 10 of his 16 in the fourth.

Jrue Holiday scored 25 points, and Julius Randle had 23 points, including 11-of-13 shooting on free throws, against his hometown team.

The Mavericks ended a streak of five straight games of allowing at least 120 points while ending a losing skid that had matched their season high.

Maxi Kleber had a career-high six blocks as the Mavericks finished with a season-high 13. Kleber had 10 points. Harrison Barnes scored 16.

Dirk Nowitzki scored a season-high seven points while playing in the second half for the second time in his six games. The 40-year-old hit a 3 late in the third quarter to top his previous high of three points.

Nowitzki is in his 21st season with one team, an NBA record. The 13-time All-Star missed the first 26 games with a longer-than-expected recovery from left ankle surgery in April. He became the sixth NBA player with 900 career wins, after the Mavericks lost his first five games.

Teams playing two games in a row against each other, as the Mavericks and Pelicans will do, isn't that unusual. Consecutive sets of such games are a little strange, though. Dallas will do that with two straight against Oklahoma City on back-to-back nights Sunday and Monday.

Pelicans: The other double-figure scorer was Frank Jackson with 10. ... Tim Frazier had nine points and seven assists.

Mavericks: Nowitzki passed Karl Malone for fourth on the career list of games played at 1,477. Nowitzki has a chance to catch John Stockton (1,504) for third. Malone and Stockton spent 18 seasons together in Utah.