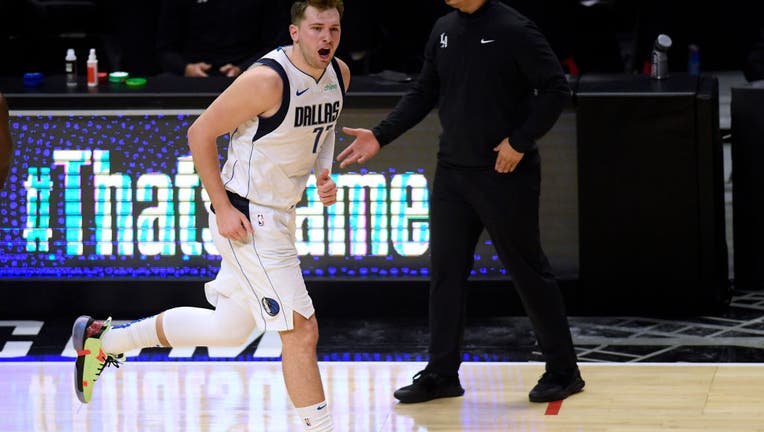 LOS ANGELES, CALIFORNIA - MAY 22: Luka Doncic #77 of the Dallas Mavericks reacts to his three pointer with Tyronn Lue of the LA Clippers in the third quarter during game one of the Western Conference first round series at Staples Center on May 22, 20

Kawhi Leonard had 26 points and 10 rebounds for the Cliuppers, and Paul George added 23 points. But they were a combined 3 of 14 on 3-pointers and the Clippers shot 31% after leading the NBA at 41% during the regular season. Marcus Morris missed all six of his 3-point attempts.

The Clippers didn't make more than three 3-pointers in a quarter until the fourth, when they hit four. Dallas controlled the closing minutes, stretching a three-point lead into 10. The Clippers were limited on field goal -- a dunk by George -- in the final minutes.

The Clippers tied it at 60 early in the third on Patrick Beverley's 3-pointer before the Mavs scored eight in a row to go up 68-60.

Leonard drew the Clippers within two on a steal and one-handed jam that left Maxi Kleber sliding across the baseline on his rear. But Finney-Smith scored on George's turnover and Doncic hit a 3, keeping the Mavs ahead 86-80 to end the third.

Trailing by 10, the Clippers outscored the Mavs 26-13 over the end of the first and start of the second quarter to take their first lead. Rajon Rondo capped the spurt with back-to-back 3-pointers.

Beverley made consecutive baskets that put the Clippers ahead by four, but Dallas answered in a hurry. The Mavs ran off 11 straight points -- including three 3-pointers by Doncic and Hardaway -- to lead 60-55 going into halftime.

The Mavs came out charging, hitting six of their first nine shots and soon leading by 12 points. The Clippers had defenders in their faces as they missed nine of their first 11 attempts, with George tossing up airballs in both quarters.

Mavericks: Kleber had six points and nine rebounds after missing six of his last eight regular-season games with a sore right Achilles. ... Both Rick Carlisle and Tyronn Lue coached without masks on, something the league approved earlier in the day.

Clippers: Cardboard cutouts were added to make the lower bowl appear full of fans, although attendance continues to be limited by pandemic rules.