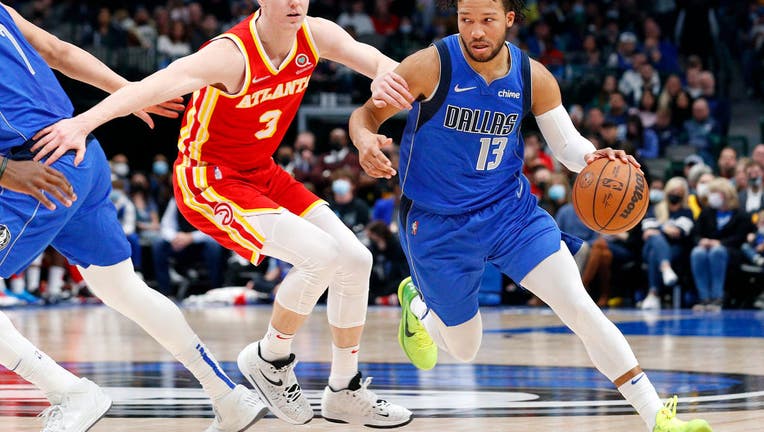 DALLAS, TEXAS - FEBRUARY 06: Jalen Brunson #13 of the Dallas Mavericks drives around Kevin Huerter #3 of the Atlanta Hawks in the first half at American Airlines Center on February 06, 2022 in Dallas, Texas. NOTE TO USER: User expressly acknowledges

DALLAS (AP) - Luka Doncic had a triple-double and Jalen Brunson scored 22 points despite both of them being in foul trouble, and the Dallas Mavericks beat the Atlanta Hawks 103-94 on Sunday night.

Doncic finished with 18 points, 10 rebounds and 11 assists after sitting almost the entire third quarter following his fifth foul less than a minute into the second half. Brunson joined him on the bench with his fifth about six minutes later.

But the Mavericks never lost the lead with a patchwork lineup that looked similar to when the team was battling COVID-19 issues earlier in the season. Once Doncic and Brunson returned in the fourth, the Mavericks put the game away for their 10th victory in 12 home games.

John Collins had 22 points and 18 rebounds for Atlanta. Trae Young missed all six of his 3-point attempts and finished with 17 points on 6-of-19 shooting in another meeting with Doncic, the fellow All-Star he was traded for near the top of the 2018 draft.

Dallas coach Jason Kidd decided to leave Doncic in the game after he picked up his third foul with 2:50 remaining in the first half. The fourth came on a charge when he drove and passed in the final minute of the second quarter.

Doncic got his fifth -- a technical -- when he bumped Young as both chased a loose ball early in the third. Kidd chose not to challenge.

After Brunson picked up his fifth with 6:21 left in the third, the Mavericks pushed their lead to eight before Atlanta eventually pulled even.

Young got the Hawks within two on a floater with 4 1/2 minutes to go, but a bucket by Dwight Powell started a 12-2 run for a 100-88 lead with 1:41 remaining. The clinching surge was capped by 3-pointers from Brunson and Reggie Bullock, who also had 22 points.

The Mavericks won the rematch after getting blown out in the season opener in Atlanta, which was also Kidd's debut as Dallas coach.

Mavericks: F/C Kristaps Porzingis missed his 20th game of the season because of injuries or COVID-19 protocols. It was the fourth consecutive game he was sidelined with a bone bruise in his right knee. ... Dallas also was without F Maxi Kleber (left knee) and Sterling Brown (left foot soreness). Brown has missed the past 10 games. G Tim Hardaway is out long-term with a broken left foot. ... Brunson was 4 of 5 from deep, and Bullock 6 of 10. Dallas was 16 of 36 (44%).

Mavericks: Hosts Detroit on Tuesday in the first meeting of the season. Dallas has won three straight in the series.