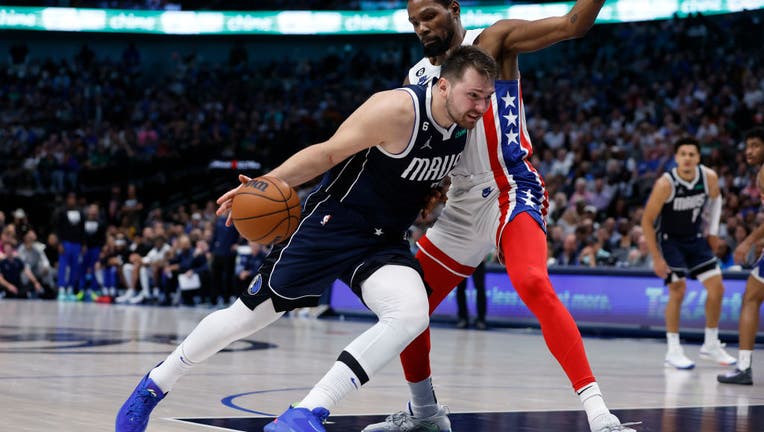 DALLAS, TEXAS - NOVEMBER 07: Luka Doncic #77 of the Dallas Mavericks drives to the basket against Kevin Durant #7 of the Brooklyn Nets in the second half of the game at American Airlines Center on November 07, 2022 in Dallas, Texas. NOTE TO USER: Use

DALLAS - Luka Doncic scored 36 points, becoming only the second NBA player ever with nine consecutive games of at least 30 to begin the season, and the Dallas Mavericks beat the Brooklyn Nets 96-94 on Monday night.

Dorian Finney-Smith scored 18 points and Josh Green had 16 for the Mavericks, who rallied from a 14-point first-quarter deficit and won their fourth straight.

"We started out down two touchdowns," Mavericks coach Jason Kidd said. "We had a lot of careless turnovers (22 total after averaging 13.5) but found a way to win."

Doncic played 38 minutes and passed the 30-point mark on a step-back 3-pointer with 3 seconds left on the shot clock with 7:54 remaining in the fourth period to pull Dallas to 78-77.

Before the game, Nets acting coach Jacque Vaughn stated a goal of limiting Doncic’s trips to the line after he shot 13 free throws, making 11, among his 41 points when Dallas won at Brooklyn 129-125 in overtime on Oct. 27.

Doncic’s 3-pointer began a 14-0 Mavericks run – including a technical foul on Durant followed by him jawing at the Dallas bench – for an 88-78 lead with 5 minutes left.

Brooklyn inbounded with 6.7 seconds left and Durant was fouled by Reggie Bullock while attempting a 3-pointer. Durant, who hit all 52 of his free throws in the previous six games, hit the first but rimmed out the second. He intentionally missed the third free throw, and Dallas came away with the ensuing scramble for the ball.

The previous two games saw the Nets tie a franchise record with a 40-point road win at Washington followed by a four-point win at Charlotte during which they closed on a 23-7 run.

"We’re headed in the right direction," said O’Neale, who hit 4 of 8 3-pointers. "We lost this one. Like to have it, but I feel like the whole road trip we did a lot of good things."

Nets: Ben Simmons came off the bench after missing the previous four games with left knee soreness. Simmons had two points and three rebounds in 16 minutes. ... F Yuta Watanabe left the game three minutes into the second period with a sprained left ankle after playing five minutes. Watanabe averages 17 minutes per game. ... The reserves shot 2 for 13 in the first half. ... Vaughn said he hasn’t yet spoken with Irving since the suspension was levied.

Mavericks: Doncic accounted for 23 of 25 points by Dallas starters in the first half. ... G Tim Hardaway Jr. scored 11 points off the bench and left the game late in the third quarter with a foot or ankle injury after he slipped and fell in the paint. Kidd had no update on him after the game.

Nets: Host the New York Knicks on Wednesday in the first of the rivals’ four meetings.

Mavericks: At Orlando on Wednesday.