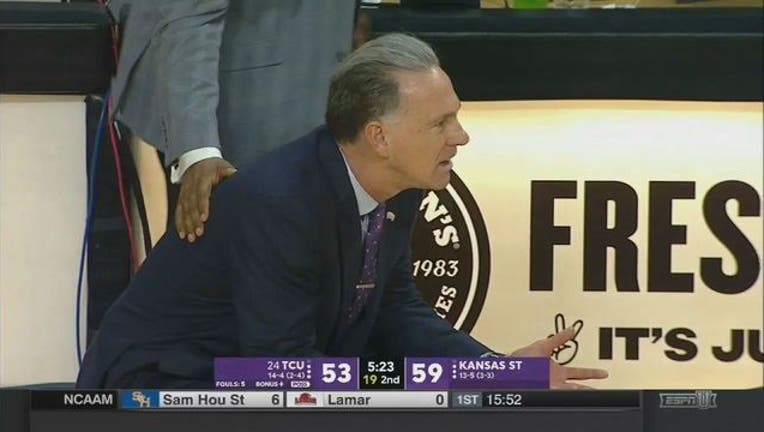 MANHATTAN, Kan. (AP) -- On throwback day at Kansas State, the Wildcats threw down another ranked opponent.

Wearing the lavender jerseys and deep purple shorts that were popular when coach Jack Hartman took the team to the Elite Eight in 1981, these Wildcats got off to a fast start and beat No. 24 TCU 73-68 Saturday.

The scoreboard was retro-fitted to reflect those days and the cheerleaders wore outfits to match. The Wildcats did their part, too, with Dean Wade scoring 20 points.

"He was great on defense in the beginning. We went to him and he got a couple of baskets. I think his confidence has grown and he has grown in practice," coach Bruce Weber said.

Coming off a win over No. 4 Oklahoma earlier in the week, the Wildcats raced to a 7-0 lead.

That wasn't the only adversity the Horned Frogs faced.

TCU coach Jamie Dixon was called for a technical foul later in the first half, then drew another tech in the second half and was ejected. The Kansas State crowd serenaded Dixon as he walked off, and TCU assistant David Patrick took over.

"I told the players afterwards, I take full responsibility on the loss. It was on me," Dixon said.

"I gave them points -- four free throws -- and I think they made three of them and all in a close game that just kills our team," he said.

"That is the first time it has ever happened to me, getting kicked out. I am surprised by what happened, but it is what it is." -- Dixon.

TCU: The Horned Frogs have lost four of five since starting out at 13-0.

With the loss, TCU will more than likely fall out of the AP Top 25.

The win gives Kansas State back-to-back wins over ranked opponents for the first time since the 2014-15 season, when it defeated Kansas and Iowa State in back-to-back outings.

Kansas State: The Wildcats play at Baylor on Monday.