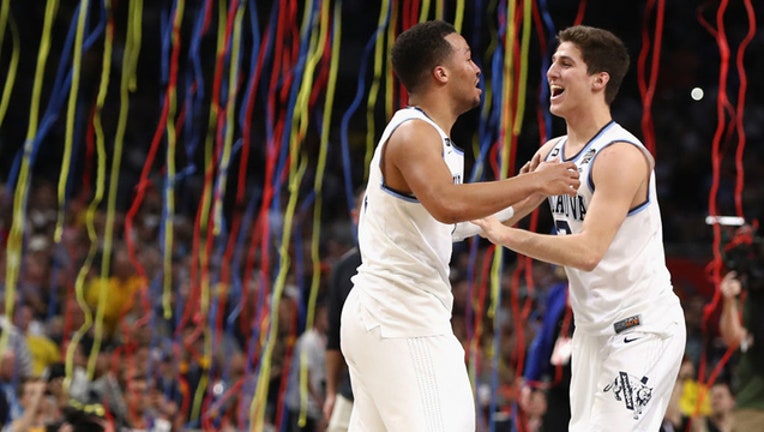 SAN ANTONIO (AP) - When he wasn't dribbling behind his back, winking to the TV announcers, stuffing shots or dishing out assists, Villanova guard Donte DiVincenzo was making it rain.

The redhead kid with the nickname Big Ragu came off the bench to make five 3s and score 31 points Monday to lift 'Nova to another blowout victory in the NCAA Tournament - this time 79-62 over Michigan for its second national title in three seasons.

The sophomore guard had 12 points and an assist during a first-half run to help the Wildcats (36-4) pull ahead, then scored nine straight for Villanova midway through the second to snuff out the Wolverines. He capped the second shooting skein with a 3-pointer from a step behind the arc. He punctuated it with a knowing wink over to the sideline, where TV announcers Jim Nantz and Bill Raftery were sitting.

Yep, he knew he could do it. And his teammates were more than willing to let him steal the show.

"If someone's hot, feed 'em," said Jalen Brunson, the national Player of the Year, who finished with nine points and was perfectly fine with playing a supporting role on this night.

In taking the program's third overall title, Villanova won all six games by double digits over this tournament run, joining Michigan State (2000), Duke (2001) and North Carolina (2009) in that rare air.

The last team to win its two Final Four games by 16 or more: UCLA in 1968. During the dynasty.

One key question: Does Jay Wright's team belong on the list of the best of all-time?

Maybe so, considering the way Villanova dismantled everyone in front of it in a tournament that was dripping with upsets, underdogs and at least the appearance of parity.

Maybe so, considering the Wildcats won in seemingly every way imaginable. This victory came two nights after they set a Final Four record with 18 3-pointers (they had 10 in this one), and one week after they relied more on defense in a win over Texas Tech in the Elite Eight.

"We don't really look at it that way," Wright said. "We don't look at it as, did we just dominate that team? No. We played well."

And really, that debate's for later.

DiVincenzo squashed any questions about this game with a 10-for-15 shooting night - 5 for 7 from 3 -that was, frankly, better than that. He was a no-doubt winner of the Final Four's most-outstanding-player award.

With Michigan trying to stay in striking range early in the second half, he opened his game-sealing run with an around-the-back dribble to get to the hoop and get fouled. On the other end, he delivered a two-handed rejection of Michigan's Charles Matthews - his second block of the game, to go with five rebounds and three assists - when Matthews tried to bring it into the paint.

The 3 that capped things off came from a big step behind the arc and gave Villanova a 62-44 lead with 7:58 left.

"Honestly, I didn't look at the score at all," DiVincenzo said. "I didn't know how many points I had. I didn't know any of that. I was just trying to make the right play. And Omari (Spellman) was setting unbelievable screens for me getting me open. And I was just feeling it."

About the only drama at the end was whether DiVincenzo could unwrap himself from his teammates' mob hug to hurl the ball underhanded toward the rafters after the buzzer. He succeeded there, too.

"Sometimes I think about whether I'm a good defender, because in practice, he makes me look bad," said junior Mikal Bridges, who likely made this his final audition for the NBA with a 19-point night on 7-for-12 shooting.

What a couple of months it's been for Philly. First the Eagles. Now this. The Super Bowl, though, was a classic. This one was only beautiful to one team.

Michigan (33-8) came out playing tough-nosed defense it relied on over a 14-game winning streak that got the Wolverines to their second final in six years.

Moe Wagner scored 11 early points to pick up where he left off in a dominating performance in the semifinal. Villanova started 1 for 9 from 3-point range. And yet, after DiVincenzo banged down a 3 from a step behind the arc for Villanova's second of the night, coach John Beilein looked at the scoreboard and saw his team behind, 23-21.

"The way DiVincenzo shot the ball, it was just incredible for us to try to win that game with the roll he went on," the coach said.

If his first 3 wasn't demoralizing enough, DiVincenzo made another, then took a bounce pass from Brunson for a dunk, then paid it forward with an assist to Spellman. It was part of a 23-7 run that gave the Wildcats a nine-point lead at halftime; they never looked back.

DiVincenzo competed hard for a starting spot this year, but didn't win it. He made the best of it as a sixth man. Wright waited all of 52 seconds in the second half to get him back on the floor.

"It just shows how much depth we have, and that we don't care who gets the credit," Brunson said.

Though he didn't play in the 2016 Final Four, DiVincenzo got his fair share of credit for that title, too.

His season cut short because of a knee injury, he was healthy enough to run the scout squad for Villanova. Some on the team said he was better at doing Oklahoma star Buddy Hield than Hield himself.

But maybe a more apt comparison is to ... Bill Walton and Kareem Abdul-Jabbar?

DiVincenzo joins them in the rare club of players to crack 30 points while also shooting better than 66 percent from the floor in a Final Four game.