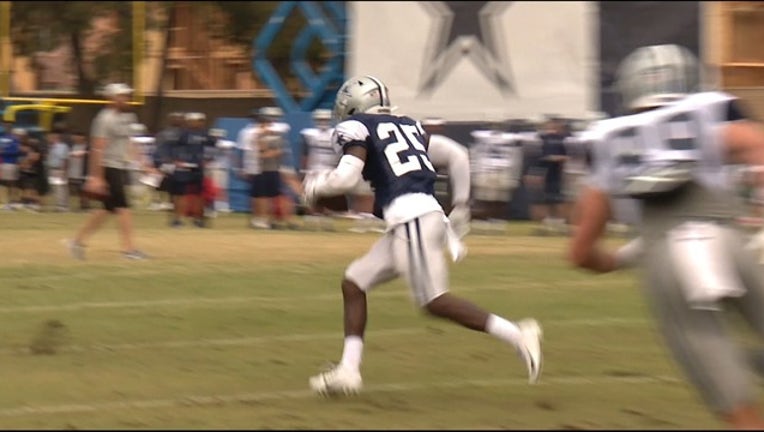 OXNARD, Calif. (AP) - Xavier Woods was always ready with a reminder for Jerry Jones when he saw the Dallas owner and general manager during an offseason filled with talk about whether the Cowboys were adding a safety.

"I'd run into him and he said, 'Why are you so worried about safety? Got me back there. Why is everybody worried about a safety? I can do it,'" Jones recalled the third-year player saying.

After so much talk about signing Earl Thomas (the free agent chose Baltimore) and using a high draft pick on a safety (the Cowboys finally got a sixth-rounder in Donovan Wilson), Woods and Jeff Heath are still the starters with the season opener a month away.

Woods has been one of the defensive stars at training camp in California with several interceptions. Just like Wilson this year, Woods was a sixth-round pick in 2017. But that isn't any more reason for him to wonder whether the Cowboys want to find a replacement.

"If you showcase what you have and you become that guy, then it won't come with it," Woods said. "Until you do, it's always going to be a talk. It's a business. They're trying to get the best guys to win. I understand that."

Heath was undrafted in 2013 and forced to start nine games as a rookie because of injuries. The 28-year-old finally became a full-time starter four years later, leading the team with a career-high three interceptions in 2017.

The opening for Heath came when the Cowboys decided to let Barry Church go in free agency rather than give him the $26 million, four-year contract he got from Jacksonville. The Jaguars released Church after last season.

Age was part of the hesitation for the Cowboys when they didn't get serious in the bidding for Thomas. The former Texas standout has turned 30 since signing a $55 million, four-year deal with $32 million guaranteed from the Ravens.

The Cowboys signed George Iloka in free agency, but the former Cincinnati and Minnesota safety has been buried on the depth chart in camp.

"I would take an upgrade at any position at any time," executive vice president of personnel Stephen Jones said. "We're constantly looking, whether it's safety, whether it's any position. If we saw an upgrade for our roster, we'd be all over it, if it made sense for us."

Secondary coach Kris Richard said he never felt the need to address all the talk of replacements with his two starting safeties.

"It's kind of the nature of the beast," said Richard, going into his second season with Dallas. "Really organizationally, if you're not trying to bring in guys each and every single year to make your team better and more competitive, you can't justifiably say that you're actually out there trying to win."

The 28-year-old Heath is among the oldest players on a Dallas defense that has become significantly younger the past couple of seasons. Woods is beginning to join him as a leader, calling himself "way more" vocal after a full season as a starter.

"In the offseason, I took a step forward," Woods said. "I'm still taking a step forward. It's going to be a daily goal for me to be better, to be a better leader, to be more vocal."

Woods doesn't feel any disrespect over the idea of being replaced. He felt that two years ago - still does, he says - after getting drafted much later than he thought.

"That's going to be an every day, every season, every year thing," Woods said.

For Heath, talk of being replaced has been an every offseason thing.

"This one wasn't much different," Heath said. "We understand that there's a lot of talk outside the building. I speak for myself and I think 'X' feels the same way. We're just going to do our job when we're on the field. That's all there is to it."

Well, and lobbying Jerry Jones when the opportunity arises.