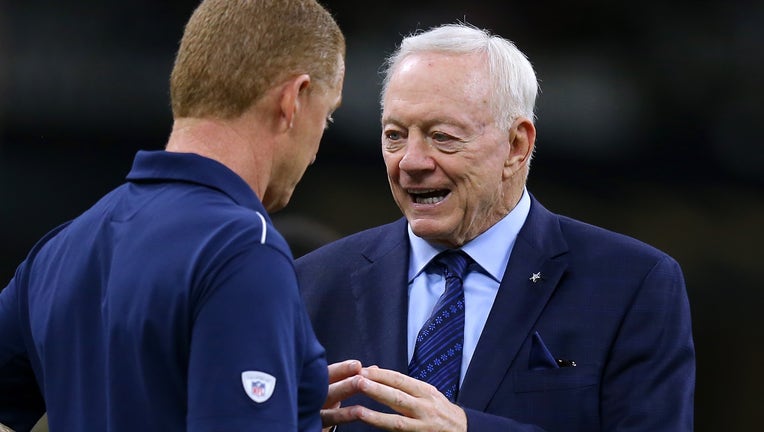 NEW ORLEANS, LOUISIANA - SEPTEMBER 29: Jerry Jones owner of the Dallas Cowboys talks to head coach Jason Garrett before a game against the New Orleans Saints at the Mercedes Benz Superdome on September 29, 2019 in New Orleans, Louisiana. (Photo by Jo

It is very unlikely there will be any movement when it comes to the coaching staff for the Dallas Cowboys — at least not yet.

Jerry Jones was extremely candid after Sunday’s 13-9 loss to the Patriots. He called it a "significant setback" for the Cowboys.

Jones expressed his frustrations with many things from the latest game: the crazy weather, the two tripping calls — which the NFL informed the Cowboys they got wrong — and ultimately some of the coaching decisions made by head coach Jason Garrett and his staff.

Jerry's frustration continued on Tuesday when he talked with 105.3 The Fan, but he said there are no coaching changes in the near future.

Much was talked about Garrett's decision to kick a field goal in the fourth quarter instead of going on for it on fourth down, which would have tied up the score.

Jones was highly critical of the special teams and said that's 100 percent on coaching, but he said Garrett and company aren't going anywhere.

“I sit there and watch games and I look at every aspect of it since I put the coaches out there and since I put the players out there at the end of the day with a lot of help and with a collaborative effort. But at the end of the day, the buck stops with me,” Jones said. “The game is full of things that were overlooked or full of missed calls you try not to have it in such a critical situation. That last one was critical. The timing of it was critical.”

Jones was asked what needs to be done in order for him to feel better about Garrett and the coaching staff. He said they need to regroup and find a way to win on Thursday.

During the annual Thanksgiving Day game, the Cowboys will host an 8-3 Buffalo Bills team.