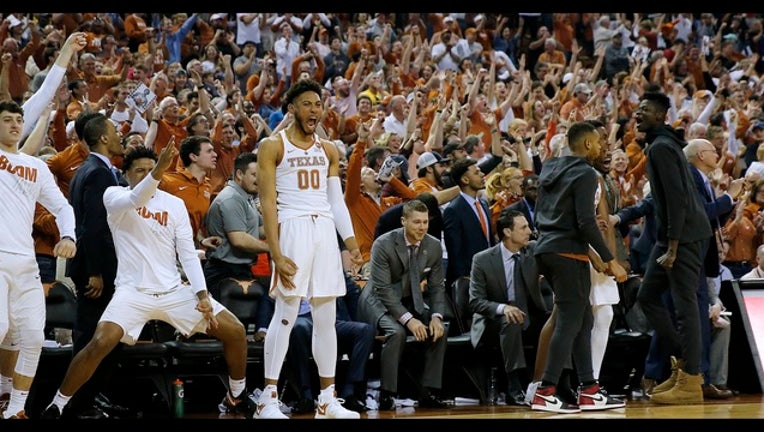 The Texas Longhorns bench reacts as the Texas Longhorns defeated the West Virginia Mountaineers 87-79 in overtime at the Frank Erwin Center on March 3, 2018 in Austin, Texas. (Photo by Chris Covatta/Getty Images)

AUSTIN, Texas (AP) - Matt Coleman and Kerwin Roach II each scored 22 points and Texas used an 11-0 run early in overtime to pull away from No. 20 West Virginia for an 87-79 win Saturday that was critical for the Longhorns' NCAA Tournament hopes.

The Longhorns (18-13, 8-10) were in desperate need of a big late-season victory to shore up an inconsistent resume and got it in their seventh overtime game of the season.

The Big 12's worst offensive team made 11 3-pointers, including two in the overtime by Coleman and Jacob Young, and shot 57 percent from the field.

West Virginia led 48-42 early in the second half before Texas ripped off a 15-2 run keyed by a pair of 3-pointers from Dylan Osetkowski, who made five in the game. The Mountaineers forced overtime on Jevon Carter's driving reverse layup with 1.6 seconds left in regulation.

Coleman put Texas up 76-74 with a 3-pointer from the right corner and made a short jumper before Young's 3 pointer stretched the lead to seven and the Longhorns held on the rest of the way.

Freshman Jericho Sims scored 17 points and had eight rebounds for Texas, which lost by 35 to West Virginia in January.

Texas: The Longhorns are seeing a late-season emergence from Sims, who will be critical to offset the loss of forward Mo Bamba, who missed his second consecutive game with a sprained left toe. Sims was 6 of 7 and that kind of production will be needed in the Big 12 tournament. The Longhorns are still without shooting guard Eric Davis Jr., who has been held out for three games after his name surfaced in a report that suggested he received payments from an agent representative.

West Virginia will play in the Big 12 tournament

Texas will plays in the Big 12 tournament