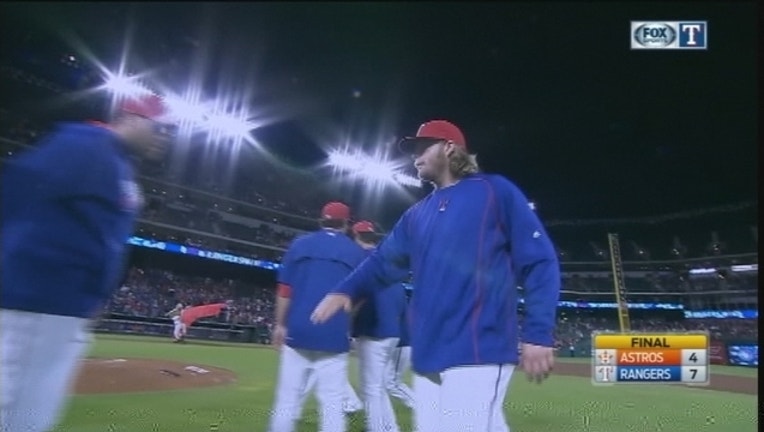 The Rangers have won four straight and have swept three straight home series from the Astros for 10 total games.

Desmond's opposite-field homer in the first landed in the Texas bullpen beyond right-center following two-out singles by Adrian Beltre and Prince Fielder.

Beltre had three hits, including his third homer of the season in the seventh inning.

Griffin (2-0) trailed 1-0 two batters in after giving up back-to-back doubles to Jose Altuve and George Springer but allowed only one other run and four hits through six innings. Griffin was another late addition to Texas' roster. He didn't pitch in the majors during 2014-15 following Tommy John surgery and signed a minor league deal with the Rangers in January.

Keuchel (2-2) gave up season highs of six runs and 13 hits in six innings. Keuchel didn't allow more than 11 hits in any game last season. The only time that he gave up more than six runs during 2015 was nine at Globe Life Park last September.

Desmond also doubled to go 4 for 11 in the series after previously going 5 for 46, raising his batting average from .109 to .158. A shortstop throughout his previous seven seasons in the majors, he was signed as a free agent on Feb. 29 and moved to left field.

Colby Rasmus homered twice for Houston, giving him five for the season and his ninth career multi-homer game. He drove in three runs and has reached safely in 15 of 16 games.

Shawn Tolleson earned his sixth save in seven chances.

Elvis Andrus extended his hitting streak to eight games with a third-inning RBI triple to left field that Rasmus misjudged on a head-first dive toward the infield.

Astros: RHP Lance McCullers (shoulder) is scheduled to throw off a mound on Friday.

RHP Collin McHugh (1-2), who has allowed nine earned runs and 21 hits in 12 2/3 innings, will face the Red Sox in Houston. The Rangers will open a three-game road series against the White Sox with LHP Martin Perez (0-1), who has quality starts in each of his three appearances