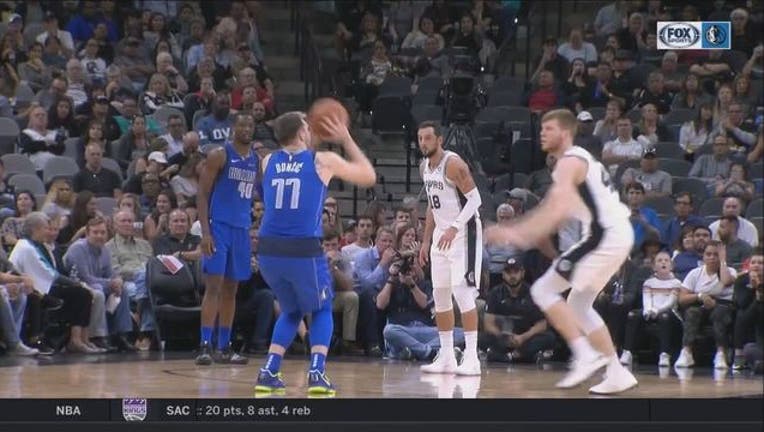 SAN ANTONIO (AP) - DeMar DeRozan had 34 points and nine assists and the San Antonio Spurs withstood a 31-point outburst by Dallas rookie Luka Doncic in a 113-108 overtime victory over the Mavericks on Monday night.

DeRozan and Doncic battled in the final minutes of regulation and into overtime in a game that included 10 lead changes and 12 ties.

DeRozan made two free throws to give the Spurs a 102-101 lead with 39.1 seconds left in regulation. Doncic missed a driving layup against Aldridge, and DeRozan missed a jumper in the lane. Dennis Smith Jr. was fouled by DeRozan with 1.6 seconds remaining. The Mavericks' point guard made the first free throw, tying the game at 102-all, and missed the second. DeRozan missed a jumper inside the 3-point line as regulation expired.

It was one of the few times DeRozan failed to come through on either offense and defense for the Spurs. The 6-foot-7 guard, who was acquired in the offseason from Toronto for Kawhi Leonard, was 12 for 21 from the field and had six rebounds and three steals.

With 7 minutes remaining in regulation, DeRozan stole the ball from Wes Matthews, sprinted downcourt and backed up Matthews before hitting a turnaround, fadeaway jumper from 12 feet for an 89-83 lead.

The spurt erased the Mavericks' 21-6 run at the start of the third that was punctuated by Doncic's 3-pointer and the Mavericks ahead 66-59.

The Spurs made six 3-pointers in the third, including two in a row by Belinelli, followed by another by Forbes, to reclaim a 76-71 lead with a minute remaining in the period.

Smith finished with 22 points for Dallas.

Mavericks: Doncic played 37 minutes despite suffering from a strained back that put his status in question. Donic tweaked his left ankle on a drive late in overtime but remained in the game. . Dallas extended its franchise record to 189 straight games with at least five 3-pointers. The streak began March 9, 2016. . DeAndre Jordan had 18 rebounds but was held to eight points, marking the first time he has not had a double-double this season.

Spurs: At Phoenix on Wednesday.