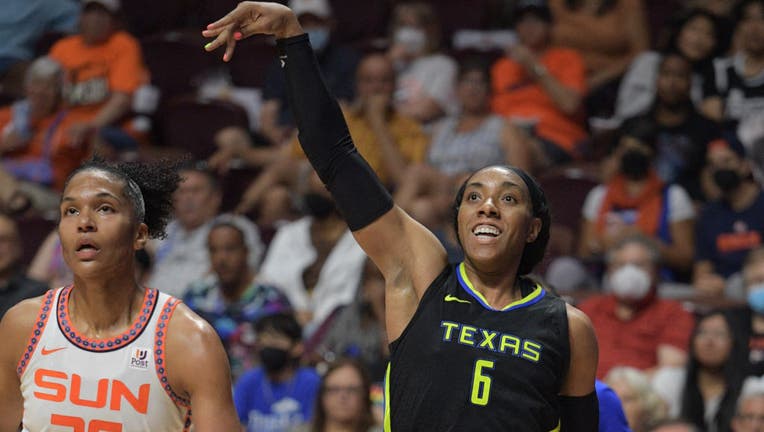 UNCASVILLE, CT - AUGUST 21: Dallas Wings forward Kayla Thornton (6) keeps her follow through and smiles while her three point shot goes through the net while Connecticut Sun forward Alyssa Thomas (25) looks on during Game 2 of the First Round of the

UNCASVILLE, Conn. (AP) - Kayla Thornton scored 20 points and Teaira McCowan had 17 points and 11 rebounds to help the Dallas Wings beat the Connecticut Sun 89-79 on Sunday to avoid elimination and win the franchise's first playoff game since 2009.

The sixth-seeded Wings, who will host Wednesday's Game 3, never trailed. They led by double digits for the final 26-plus minutes, despite a 22-2 fourth-quarter run that trimmed a 31-point Sun deficit to 84-73 with less than 2 minutes left.

"I think we have to learn how to capitalize," McCowan said. "With us being a young team, you know, sometimes we get a little sloppy -- as you could see at the end. But, I mean, once we tighten that up, it'll be good for the next game."

"I knew I had to go in and do what I do best, which is rebound, be a dominant force inside, and that's what I did tonight for my teammates" said McCowan, who had seven points and five rebounds in Game 1.

"We have to put our talent to work. I mean, we know what we can do. We have great players on our team so if everyone plays their role, plays team offense and defense, we'll be fine.