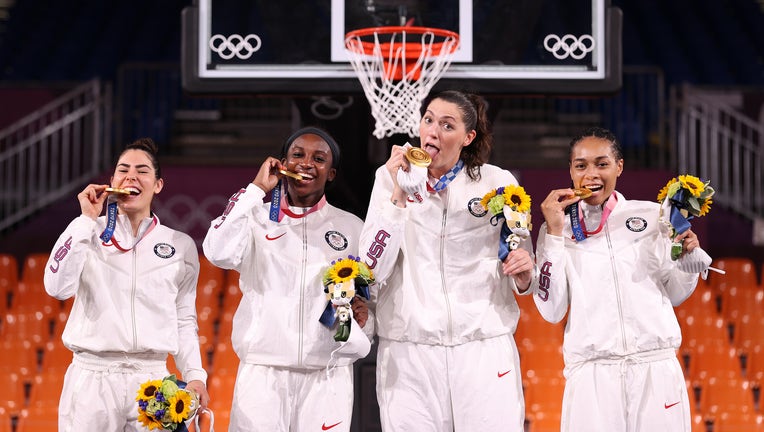 Gold medalists Kelsey Plum, Jacquelyn Young, Stefanie Dolson and Allisha Gray of Team United States pose on the podium during the medal ceremony for in the 3x3 Basketball competition on day five of the Tokyo 2020 Olympic Games at Aomi Urban Sports Pa

TOKYO - Their scrapbooks and trophy cases are filled with memories from Final Fours, national titles, All-America honors and even some impressive showings in the pros.

Now, they have Olympic gold medals to go with all that.

The U.S. team of Stefanie Dolson, Allisha Gray, Kelsey Plum and Jackie Young took an early lead against the team from Russia, then held on for an 18-15 victory Wednesday to win the title in the debut of 3-on-3 basketball at the Olympics. Gray plays for the WNBA's Dallas Wings.

"In 10 years, we'll look back and say `Damn, we did that,'" Dolson said. "Hopefully we started something."

Dolson did the honors during the medals ceremony, taking the gold prizes and placing them over her teammates' necks. They stood with hands over hearts during the national anthem.

Their celebration couldn't beat Latvia's, though. After Karlis Lasmanis drained a shot from behind the arc to close out the men's final, he found himself at the bottom of a four-man dogpile. The game-winner gave his country a 21-18 victory over the Russians and its first medal of the Games. Bronze medals went to China's women and Serbia's men.

Much as they did in the final, the Americans dominated through most of the five-day tournament. They played nine games and lost only one.

Plum, who became the all-time leading scorer in NCAA history during her four years at Washington, led the way in this event, as well. She scored 55 points over the nine games. In the final, she scored all five of her points early to stake the U.S. to a lead it never relinquished.

"I didn't think this was going to happen," said the guard, who suffered an Achilles injury last year and has been on a long road back. "I didn't think it was in the cards with my Achilles. And for Lou to get COVID and Jackie to come in. So many things. This group kept dealing with it."

"Lou," is Katie Lou Samuelson, whose positive COVID-19 test earlier this month forced a quick shuffling of the roster and opened a spot for Young.

All four players who made it to Tokyo are in the midst of successful WNBA careers. All made it there after college careers that made stops at the Final Four. Dolson played at UConn, Gray at South Carolina and Young was at Notre Dame. Of the four, Plum is the only one who didn't win a national title in college.

The gold medal seems like much more than a consolation prize.

"USA Basketball didn't quit on me," Plum said. "So, this would probably rank the highest so far."

When the U.S. game ended, Plum got in a hug huddle with her teammates, then they made it over to the stands for a visit with IOC President Thomas Bach.

Yes, this foursome is officially part of the see-and-be-seen crowd in Tokyo.

Time will tell if the half-court version of this sport -- brought to the Olympic program with the intent of luring a younger audience, and a more diverse collection of countries, into the game -- turns into one of the cool kids on the Olympic program. Even with no fans in the stands, they sure are trying hard.

With a DJ spinning records and a cheeky announcer calling play-by-play -- "Izzzzzz goooodddd!" -- the players were greeted during pre-game introductions by a Japanese percussion team featuring a 5-foot-5 guy wailing on a massive Taiko drum.

The game? Not nearly as free-flowing as advertised, and the closer teams got to medals, the more things tightened up.

Dolson, the 6-foot-5 forward, took a nasty elbow to the face about two-thirds into the final but recovered quickly. She ended up making four free throws -- yes, those exist in this version of the half-court game -- and the U.S. scored eight of its 18 points in this game from the line.

On this night, ugly sure felt beautiful. This foursome is now part of history in the 3-on-3 game.

"Everyone knows us for 5-on-5," Dolson said. "I think we started something special with this as well."