The Dallas Stars are headed to the Stanley Cup Finals after a thrilling overtime win Monday night. FOX 4's Mike Doocy has the highlights and reaction.

EDMONTON, Alberta - Jamie Benn and Dallas enjoyed the moment so much that the relative silence was pretty much an afterthought.

The Stars are going to the Stanley Cup Final for the first time in 20 years.

"I've been in a couple rinks where we've clinched to go to the finals, and it erupts," interim coach Rick Bowness said. "Tonight, you're so excited, you don't even notice. ... All you're thinking about is your team."

A team with a chance to win an even bigger trophy. Benn, the captain of the Stars, didn't even touch the Western Conference championship trophy during the postgame presentation after they eliminated top-seeded Vegas 3-2 in overtime Monday night in the NHL bubble in Edmonton.

Denis Gurianov scored on a one-timer during a power play 3:36 into overtime for the Stars, who won their only Stanley Cup in 1999, a year before returning and coming up short. Benn and Joel Kiviranta, a rookie like Gurianov, had goals in the final 10:06 of regulation to tie Game 5 of the Western Conference Final.

"It's been a crazy year, right from the start, but we've stuck together as a group, and played some fun hockey," said Benn, who had never before been past the second round of the playoffs. "We find ways to win right now, and that's all that matters."

Anton Khudobin faced only one shot in overtime and had 34 saves for the Stars, who are 5-0 in overtime this postseason.

"We always know that it might take the whole game," Tyler Seguin said. "We're a confident group." 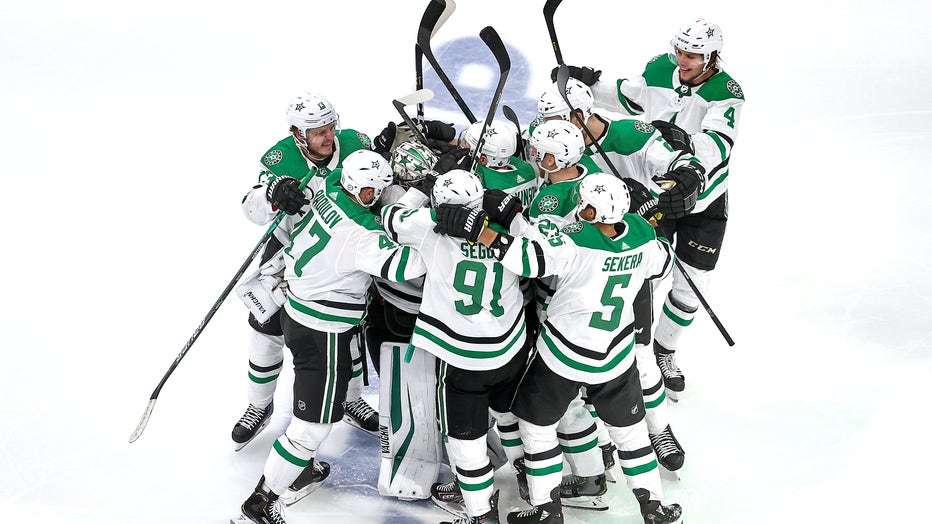 EDMONTON, ALBERTA - SEPTEMBER 14: Anton Khudobin #35 of the Dallas Stars is surrounded by his teammates as they celebrate their 3-2 overtime victory against the Vegas Golden Knights to win Game Five of the Western Conference Final during the 2020 NHL

The Stars also won 3-2 in Game 3 against Vegas, when Alexander Radulov scored 31 seconds into OT. They closed out Game 5 after Zach Whitecloud was sent off for delay of game for knocking the puck out of play.

"Things like that happen and they happen to anyone," said Reilly Smith, who put Vegas up 2-0 in the third period. "This game didn't come down to one play. The onus is on all of us. We have to do a better job when we're up 2-0."

Smith's first goal in 11 games came just 15 seconds into the third, converting a wrist shot from the top of the right circle. That was at the end of an odd-man rush that followed Lehner's kick save at the other end on a shot by Seguin.

"This game, a lot like the rest of the series, we just could never get that next goal to extend it. It was 2-0, they got the 2-1 goal," Vegas coach Pete DeBoer said. "You have to give them credit. They won the net fronts in both ends."

Dallas finally got on the board when Benn scored for the third game in a row. Esa Lindell had the puck behind the net after Benn won a faceoff, then pushed it out front off Radulov's stick before Benn turned and knocked it in.

Seguin had a one-timer from the middle of the left circle with the Stars on a power play with just over five minutes left. Lehner secured the puck, not allowing a rebound chance for Benn, who was just in front of him.

Still skating with the man advantage, Kiviranta converted a quick backhander off a loose puck after defenseman John Klingberg's long shot into traffic. It was the first point for Kiviranta since his hat trick with the overtime winner in the Game 7 against Colorado in the second round.

After the Golden Knights failed to score on three power-play opportunities in the second, Smith's goal gave them a two-goal lead when Khudobin was unable to stop an another quick shot -- like he had in the opening minute in each of the first two periods.

Chandler Stephenson got the lead for Vegas 8:14 into the first, using a forehand-backhand move to get the puck under and through Khudobin's legs. Stephenson was on the break in front of the Stars defense after a nice pass from Shea Theodore.

After Stephenson scored, the Golden Knights had some of their biggest hits in the series. Ryan Reaves took down Blake Comeau midway through the first, and a few minutes later slammed Lindell hard into the boards.

In between those jarring hits, Vegas came close to getting another goal. Alec Martinez tried a wraparound shot to Khudobin's left and Mark Stone had a rebound that led to another one -- but Lindell knocked down Max Pacioretty could get his stick on the puck.

"I didn't think that any game we kind of gave away," Stephenson said. "It seemed like we did everything right but score."

The Dallas Stars haven't played a game at the American Airlines Center in more than six months. But current pandemic rules allowed a limited number of fans to cheer on their team from inside the arena.

NOTES: Paul Stastny took a shot right at the start of the second period for Vegas, but Khudobin was able to put his glove down. In the opening seconds of the game, Nate Schmidt's one-timer was gloved by Khudobin, who was partially screened and still made the save. ,,, Seguin had two blocks only seconds apart on the first Vegas power play in the second period. ... Benn and Gurianov also had good scoring chances in the second. But Benn stuffed his stick and the puck into the right skate of a sprawling Lehner. Gurianov had a shot off Lehner's upper body that then ricocheted off and over the crossbar.

UP NEXT: The Stars wait to find out who and when they play in the Stanley Cup Final. Tampa Bay has a 3-1 series lead over the New York Islanders in the Eastern Conference Final. Game 5 of that series is Tuesday night.