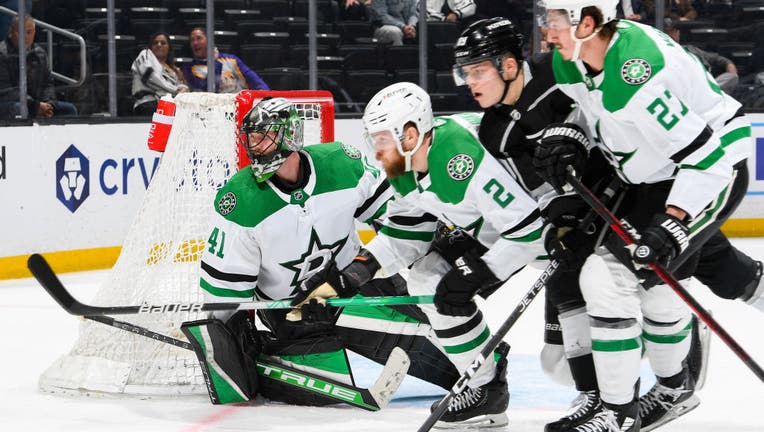 LOS ANGELES, CA - JANUARY 19: Scott Wedgewood #41 of the Dallas Stars protects the goal during the third period against the Los Angeles Kings at Crypto.com Arena on January 19, 2023 in Los Angeles, California. (Photo by Juan Ocampo/NHLI via Getty Ima

Seguin led the early charge with two goals in the first period and Scott Wedgewood made 34 saves for his first shutout this season as the Stars defeated the Los Angeles Kings 4-0 on Thursday.

"I think once we got our lead, we didn’t really shrink from that," said Southern California native Jason Robertson, who had a goal and an assist. "Our penalty kill was outstanding. Wedgie also. We just kept with it and kind of squeezed the game out."

The Stars, who moved into the Central Division lead with a Western Conference-best 61 points, had a 3-0 cushion Wednesday night at San Jose before the Sharks rallied with five unanswered goals. Dallas scored three times in the first period against the Kings and never backed off.

Besides being motivated by Wednesday's meltdown, Dallas took advantage of a Los Angeles squad coming off its first four-day break of the season.

Seguin also had an assist to match a season high with three points. It was his 44th multigoal game with the Stars. Only teammate Jamie Benn has more with Dallas (45) among active skaters.

Seguin has eight points (five goals, three assists) in his six games centering the top line since Roope Hintz was sidelined with an upper-body injury.

"Yeah, it’s great. I know how to play with those guys and I have fun playing with them," Seguin said. "I know I’m just keeping Roope’s seat warm, but they’re great players and I’m able to find open spaces out there."

Wedgewood improved to 3-2 in his career against the Kings and earned his sixth NHL shutout.

"Obviously, they’ve been hot and they’ve been kind of steamrolling through the league the last month, month-plus. So for us to come in here after what happened last time and walk away with two points is big for us," he said.

Los Angeles had won four of six but was blanked for the third time since Dec. 8. The Kings were 0 for 4 on the power play after scoring seven times in 18 opportunities this month.

Pheonix Copley, who fell to 12-3, allowed four goals on 17 shots before being pulled. Jonathan Quick stopped seven shots in the remaining 33 minutes.

"There’s no way that team down the hallway with the leaders and coach they have are going give up a three-goal lead in back-to-back games," Kings coach Todd McLellan said. "We created our own self-inflicted misery early and tried to find our game as the game wore on."

Seguin opened the scoring at 6:54 of the first when his snap shot from the top of the slot went off the inside of Copley's blocker and then through his legs.

The Stars' center then scored his second goal in the opening period for the first time since 2017 with a shot from the left faceoff circle at 17:20. Esa Lindell made it 3-0 just 84 seconds later when his snap shot from the slot hit the post and went in.

Robertson chased Copley at 7:27 of the second with his second attempt on a wraparound. Robertson was stopped on his first try before going upstairs and beating Copley short side.

Robertson, who grew up 20 minutes from downtown Los Angeles in Arcadia, is tied for fourth in the league with 31 goals. The forward has three goals and six points in three games against the Kings this season.