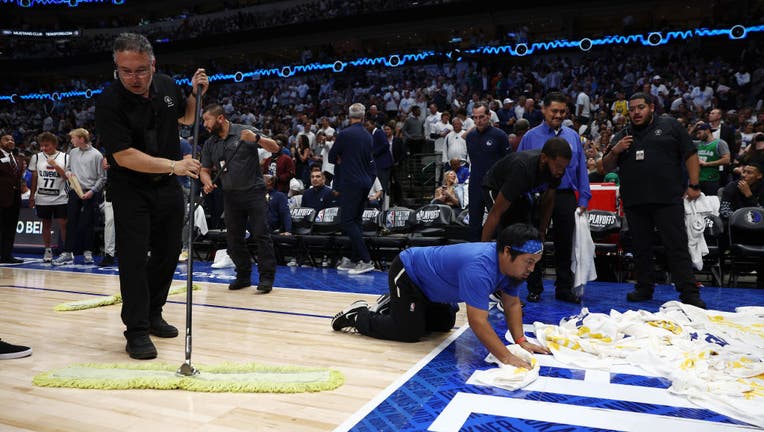 DALLAS, TEXAS - MAY 24: Attendants clean up the leak from the roof that delayed Game Four of the 2022 NBA Playoffs Western Conference Finals between the Golden State Warriors and the Dallas Mavericks at American Airlines Center on May 24, 2022 in Dal

DALLAS (AP) - The start of the second half of Game 4 of the Western Conference finals was delayed 16 minutes because of rain leaking through the roof Tuesday night at the American Airlines Center.

With heavy rain falling outside, there were at least two leaks, one dropping water near the Golden State bench. There was another leak at the end of the court where the Dallas Mavericks bench is, though water there appeared to be falling in the stands.

Both teams had already warmed up for the second half before the leaks were noticed. Workers were in the roof structure high above the court trying to patch up the areas where rain was seeping through, and also appeared to be using a tarp to collect any rain still getting through.

There was eventually five minutes added to the halftime break to allow extra warmup for players for both teams before play finally resumed with the Mavericks up 62-47.

The Mavericks ended up beating the Warriors 119-109.