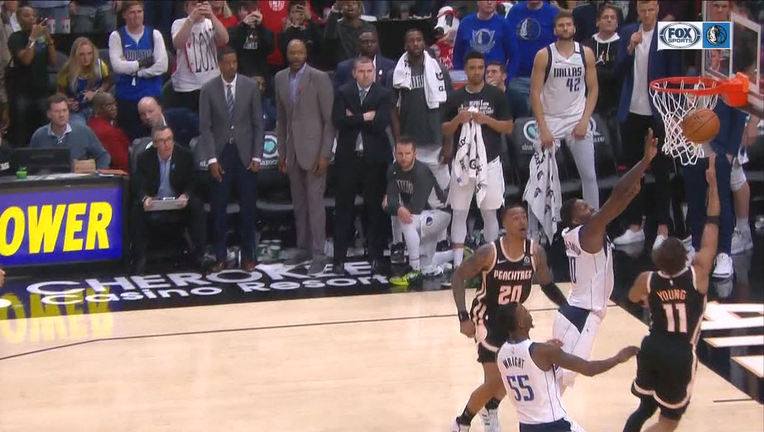 According to the Associated Press, The Mavericks were livid when John Collins' shot counted in the closing seconds. Dorian Finney-Smith appeared to be called for goaltending on Trae Young's layup attempt, and a whistle blew. Collins grabbed the ball and then scored with play apparently stopped. Officials then reviewed the play on video.

Dallas coach Rick Carlisle, asked by reporters if the officials gave him an explanation, said, “Not a sufficient one. Just a very disappointing way to end the game. Our guys fought their butts off from start to finish. My understanding, if it's a good block on a goaltend that's called and reversed, if there's no control or the other team gets it, it's a jump ball, so I don't know. It's baffling. It's disappointing."

Officiating crew chief Rodney Mott told a pool reporter that “the original call on the floor was a goaltend” and that Collins' basket was allowed because “the ball was blocked and reviewed. The ball hit the rim, so it was deemed an inadvertent whistle. It's Rule 2. Because (Collins) was in his shooting motion when my whistle blew, it's deemed continuation, so therefore the basket counts."

Mavs radio broadcaster Chuck Cooperstein said Cuban was steaming in the locker room after the game.

“He went off for six minutes and I think he was even more strident then than he was in those tweets and those quotes are out there. I just think that if somehow he was able to reign it in a little bit and then the Mavs decided they were going to protest, I have a feeling they would of had a better chance in the protest,” Cooperstein said.

The official protest of the loss has little chance of succeeding. In all of NBA history, a protest has only been upheld three times.

The more likely outcome is that the NBA commissioner will force Cuban to pay a fine for his public criticism of the call and the overall state of officiating in the NBA.