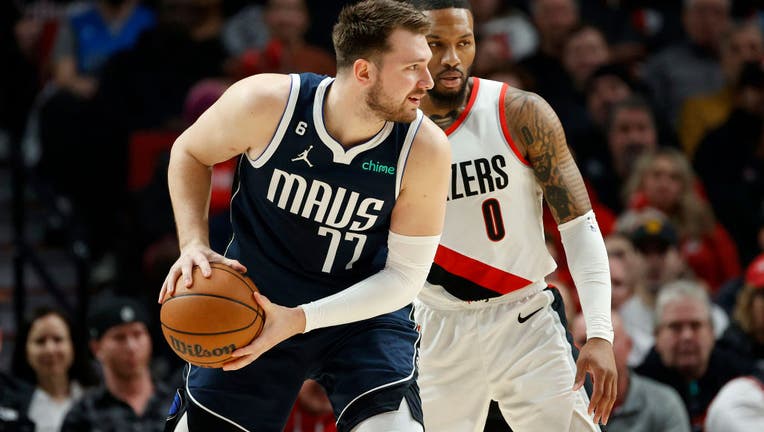 PORTLAND, OREGON - JANUARY 14: Damian Lillard #0 of the Portland Trail Blazers guards Luka Doncic #77 of the Dallas Mavericks during the first quarter of the game at Moda Center on January 14, 2023 in Portland, Oregon. NOTE TO USER: User expressly ac

PORTLAND, Ore. (AP) - Damian Lillard had 36 points and 10 assists, and the Portland Trail Blazers snapped a five-game losing streak with a 136-119 victory over the Dallas Mavericks on Saturday night.

Jusuf Nurkic added 22 points and 11 rebounds for the Blazers, who face the Mavericks again on Sunday night.

Spencer Dinwiddie led Dallas with 25 points. Luka Doncic was held to a season-low 15 points before Mavericks coach Jason Kidd pulled him with seven minutes to go.

"It feels great. When you’re trying to fight for a win and you get in that type of funk, it seems like it’s never going to end. But you’ve just got to keep pushing," Lillard said about the end of the losing streak. "I’ve been saying, when your mind is right and you’re pushing, everybody’s pulling the rope in the same direction, you find your way to where you need to get to. And a lot of times all it takes is one."

Doncic and Lillard had a heated exchange before Lillard scored to give the Blazers a 122-102 lead. Tim Hardaway Jr. left the court a short time earlier and limped to the locker room with what appeared to be a left ankle injury.

The Mavs have already been beset by injuries, with Josh Green, Maxi Kleber and Dorian Finney-Smith all out.

"Hopefully we do get healthy soon, but until then we have to play with the guys who are in uniform," Mavs coach Jason Kidd said.

Lillard started, but had been listed as questionable going into the game after he rolled his ankle early in Portland's 119-113 loss to the Cavaliers on Thursday. Lillard came out and scored 11 points in the first quarter against the Mavs.

Dallas was coming off a 119-115 double-overtime victory over the Los Angeles Lakers on Thursday. The win snapped a two-game losing skid.

Christian Wood was ruled out before the game with a sore right ankle. Wood played 48 minutes against the Lakers, with 24 points and 14 rebounds.

Portland had a 31-30 edge after the first period. The Mavericks kept it close by making eight of 13 3-point attempts.

Lillard's 3-pointer put the Blazers ahead 65-49 and they went on to lead 71-56 at halftime. Lillard finished the half with 24 points, while Doncic had five.

"We broke through," Blazers coach Chauncey Billups said. "We played so much better. We were really, really aggressive defensively and it just kind of fueled us."

Mavericks: Kidd was asked about whether he would have skipped playing college ball given the G League, like Mavs guard Jaden Hardy. He joked: "I would’ve left in the 8th grade." ... Dwight Powell got in foul trouble early, collecting his fourth with 2:48 left in the first half.

Trail Blazers: Portland lost the first two games of the series against the Mavericks this season, both in Dallas. Doncic averaged 37.5 points against the Blazers. ... With his fifth assist of the night, Lillard moved to second on the Blazers' career list ahead of Clyde Drexler. Lillard is already the team's most prolific scorer.

The Trail Blazers and the Mavericks meet again on Sunday night, completing the four-game series between the teams this season. "One-stop shop here in Portland," Kidd said. "We’re here for two games and then we don't see them again. We’re done with them after tomorrow."