It was not even close as the Dallas Mavericks won the deciding Game 7 in their playoff series with the Phoenix Suns. Now the team moves on to the Western Conference Finals.

Dallas broke through on the road after the home team won the first six games of the series, dominating in a hostile environment from start to finish. Conversely, it was an embarrassing no-show for the playoff-tested Suns — who advanced to the NBA Finals last season with a very similar roster.

The fourth-seeded Mavericks travel to face Golden State in Game 1 on Wednesday.

Doncic earned the Mavs an early lead, making his first three shots, including two 3-pointers. That helped Dallas push to a 27-17 advantage in the first quarter and a whopping 57-27 cushion at the halftime break.

Doncic and Dinwiddie, who came off the bench, combined to pour in 48 of the Mavericks’ 57 points.

Game 7 drama? Not in the desert.

Simply put, the Suns looked overwhelmed by the pressure of a Game 7. They missed shots they usually make, made bad passes they usually don’t make and looked nothing like the team that won an NBA-best 64 games during the regular season.

By halftime, many Suns fans were booing at the unsightly display. 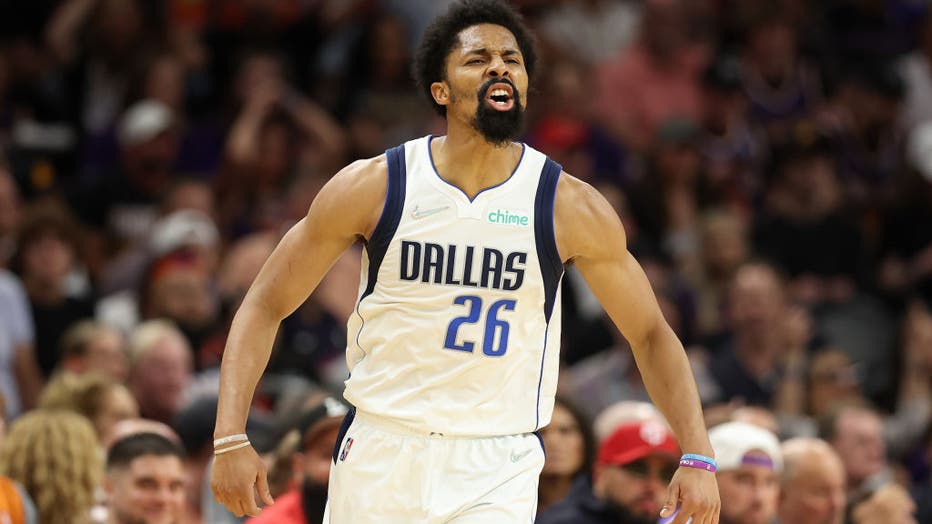 PHOENIX, ARIZONA - MAY 15: Spencer Dinwiddie #26 of the Dallas Mavericks reacts during the first half against the Phoenix Suns in Game Seven of the 2022 NBA Playoffs Western Conference Semifinals at Footprint Center on May 15, 2022 in Phoenix, Arizon

The series might have been close but the individual games usually were not. Three of the first six games were decided by at least 20 points and none of the games came down to the final possession.

Game 7 followed a similar pattern, except the team doing all the damage was the road team. Doncic was fantastic, making shots from all over the floor and finishing 12 of 19 from the field, including 6 of 11 on 3s. He also got some help: Dinwiddie was fantastic in the first half with 21 points on 7-of-10 shooting, including 4 of 5 from 3-point range.

Meanwhile, Phoenix’s All-Star backcourt of Chris Paul and Devin Booker was never a factor. The 37-year-old Paul is a 12-time All-Star that has done just about everything possible in the game except win a championship.

After this setback, it’s fair to wonder if there will be many more opportunities. Booker finished with 11 points and shot 3 of 14. Paul had 10 points and four assists. The Suns shot just 37.9% from the field.

Dallas beat the odds with the win: After the Celtics defeated the Bucks earlier Sunday, the home team was 110-33 (77%) in NBA Game 7s.

It’s the second straight year the Suns have lost a playoff series after having a 2-0 lead. They won the first two games against the Bucks in the NBA Finals last season before losing four straight games.

Mavericks: Doncic and Dinwiddie were the first teammates to have at least 20 points in a half in Game 7 since Patrick Ewing and Allan Houston did it for the Knicks in 1997, according to ESPN Stats & Info.

Suns: Phoenix shot just 6 of 23 (26.1%) from the field in the first quarter. ... The Suns hosted another sellout crowd at Footprint Center. Celebrities in attendance included baseball great Alex Rodriguez and rapper Lil’ Wayne. ... The Suns are the second team in NBA history to win at least 64 games in the regular season and not make the conference finals. The other was the Mavericks in 2007. ... Phoenix has still never won a title since coming into the league in 1968.