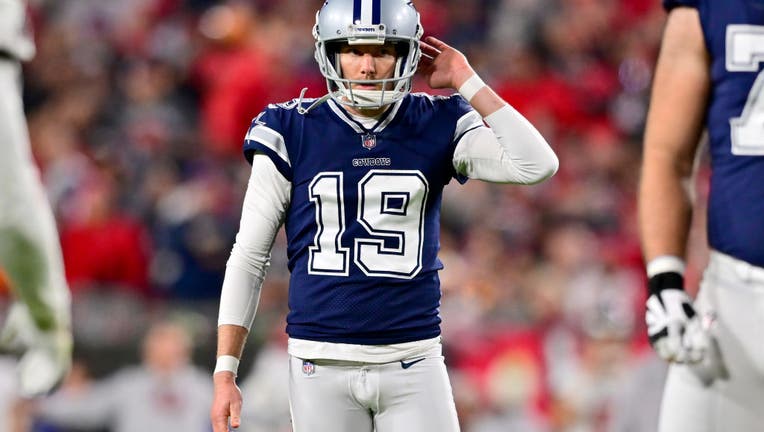 TAMPA, FLORIDA - JANUARY 16: Brett Maher #19 of the Dallas Cowboys reacts after missing an extra point against the Tampa Bay Buccaneers during the third quarter in the NFC Wild Card playoff game at Raymond James Stadium on January 16, 2023 in Tampa,

DALLAS - The Dallas Cowboys are trying to instill some confidence in their kicker ahead of Sunday’s playoff game against San Francisco.

Dallas cruised to a 31-14 win over Tampa Bay Monday night. But kicker Brett Maher’s rough night caused a lot of fans to be concerned.

Maher was solid in the regular season, though. Cowboys coaches think he’ll bounce back quickly after the worst game of his career.

Brandon Todd hoping to kick for the Dallas Cowboys

"I just played like s**t a week ago. That happens. But when you believe in each other and you believe in what we're capable of doing… knowing what that guy's done, the resiliency he's shown through his career personally, no doubt he'll come back next week and be perfect," Prescott said.

Team owner Jerry Jones has said he is not looking for a new kicker.

The Cowboys’ divisional round playoff game against the San Francisco 49ers is on FOX 4 Sunday afternoon at 5:30 p.m.

Coverage starts with a special edition of FOX 4 News Sunday afternoon at 4:30 p.m.