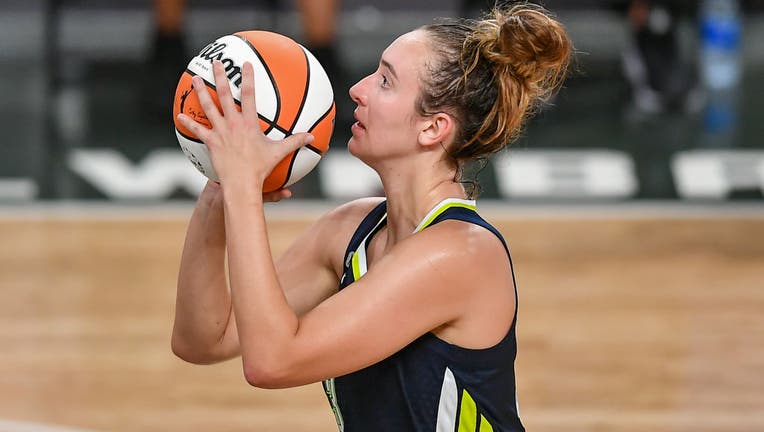 ATLANTA, GA MAY 27: Dallas guard Marina Mabrey (3) shoots a free throw during the WNBA game between the Dallas Wings and the Atlanta Dream on May 27th, 2021 at Gateway Center Arena in College Park, GA. (Photo by Rich von Biberstein/Icon Sportswire vi

Dallas (17-16), which has won five straight games for the first time since the 2018 season, can clinch the sixth playoff spot with a win over the Liberty on Wednesday.

New York (13-20) fell a game behind Phoenix for the final playoff spot despite an incredible second half by Sabrina Ionescu. She scored 32 points for New York, one shy of tying her career-high. Ionescu scored 18 of her points in the third quarter, including a four-point possession with a three-point play and a technical free throw.

Mabrey scored the first four points of the fourth quarter for a 67-64 lead and Dallas never looked back. Mabrey's third 3-pointer of the game, to set a career-high for points, gave Dallas a 79-71 lead.

Allisha Gray added 18 points for Dallas. McCowan had her string of five straight double-doubles snapped and Arike Ogunbowale did not play due to an abdominal injury suffered on Saturday.

Marine Johannes scored 13 of her 19 points in the second quarter for New York (13-20). Ionescu made all 12 of New York's free-throw attempts and reached 30 points for the fifth time this season.

Ionescu passed Teresa Weatherspoon for the Liberty’s single-season record with 208 assists. Ionescu is the first WNBA player to eclipse 500 points, 200 rebounds and 200 assists in a season.