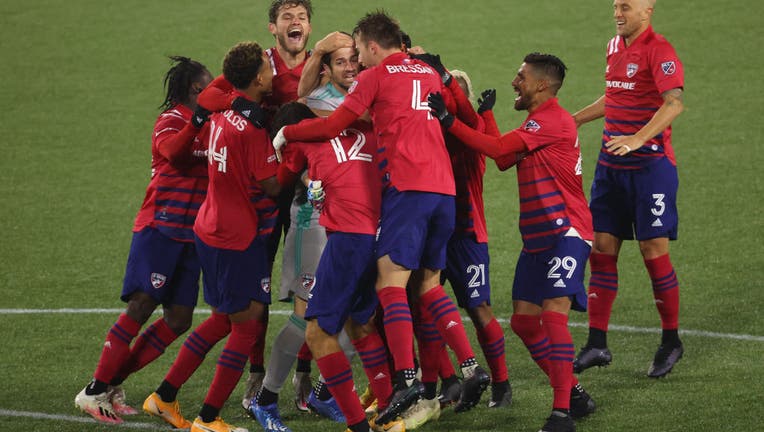 PORTLAND, OREGON: FC Dallas celebrates after defeating the Portland Timbers in penalty kicks during Round One of the MLS Cup Playoffs at Providence Park on November 22, 2020 in Portland, Oregon. (Photo by Abbie Parr/Getty Images)

Dallas will face the winner of Tuesday night's match between the defending champion Seattle Sounders and LAFC in the Western Conference semifinals.

Villafana scored in the 81st minute to give Portland the lead, but 17-year-old Ricardo Pepi's goal in stoppage time sent the match into extra time.

“When you leave a game to PKs it can go either way. It’s unfortunate because we did everything to be able to have won this match, until that moment. But this is what the game is all about. At the end of the day, you need to be good in all areas,” Timbers coach Giovanni Savarese said.

Portland was coming off a 1-1 draw with LAFC in the final regular-season game. Villafana scored the late equalizer in that one.

Against Dallas, Villafana took a short, well-placed pass from Diego Valeri and buried the ball into the far corner. It was Valeri's 100th assist across all competitions.

Pepi scored on the rebound of his shot that hit the post three minutes into stoppage time. He's the youngest player to score in the postseason for Dallas.

Valeri nearly scored at the end of extra time, but his shot hit the far post.

“We were making plays defensively and we didn’t concede. And then as the game went on, we slowly just found more of the ball, found more space, and found the game, ultimately," FC Dallas coach Luchi Gonzalez said. “We gave up that goal, which was disappointing, but at the time, this group believed in itself, maybe when a lot of others didn’t. And that’s always going to be the most important, that internal belief.”

Dallas, which won just one match on the road during the shortened regular season, fell 3-0 to Minnesota United on Decision Day after a three-game winning streak.

The Timbers won the MLS is Back Tournament in a bubble in Florida over the summer. But Portland has been hit by key injuries to Sebastian Blanco and Jaroslaw Niezgoda. Blanco was the MVP of MLS is Back.

Dallas did not play in the tournament because of positive coronavirus cases on the team.

“It’s just an indescribable feeling in those moments when you are able to win a game like that, and you’re able to celebrate with your teammates after just a year of insane amounts of work — and especially this year with insane amounts of just craziness that was hitting us constantly and different battles we went through individually and everything," Maurer said. "So just a lot of emotion."

Portland saw the return of Jeremy Ebobisse, who came in as a late substitute after missing matches with a concussion.

Franco Jara appeared to score for Dallas in the 30th minute but was determined to be offside after video review.

The Timbers won the MLS Cup in 2015, and went to the final in 2018. FC Dallas has never won the league championship.

It is the third time the teams have met in the playoffs. The last was in 2018, when the Timbers won 2-1 on the way to the final.