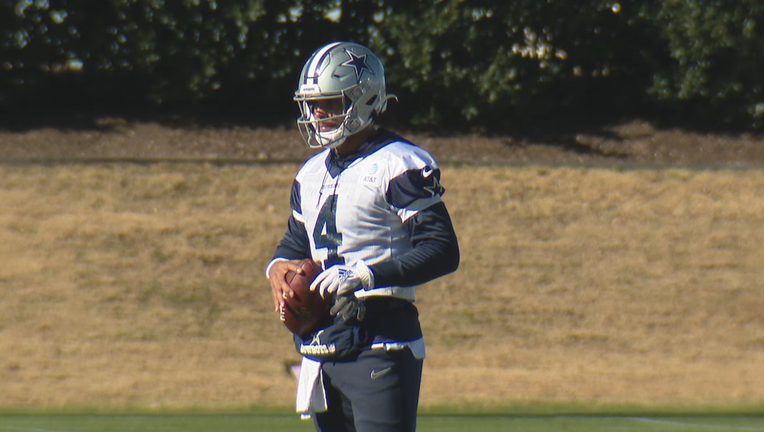 FRISCO, Texas - Cowboys quarterback Dak Prescott is expected to play through the pain of a shoulder injury on Sunday.

The Cowboys play their NFC East arch-rivals the Eagles in Philadelphia this week. If they win, they will be division champions and will host a playoff game.

But Dak limited his practice Wednesday, which has never happened before.

Coach Jason Garrett said he hurt his shoulder in last Sunday’s game against the Los Angeles Rams. He did not miss a play in that game but threw the fewest number of passes in his career.

“They did an MRI and everything seems to be okay. But he just banged it up and it’s hard for him to function right now. So don’t anticipate him throwing much in practice today,” Garrett said.

"Yea, it's frustrating. I'm a guy who likes to be in the action. I don't like to sit back. I don't like to take any reps off. But it's good mentally. It's always fun just challenging yourself and so right now it's just a mental challenge. So same preparation in the game plan, if not doubling down since I don't get those physical reps. But I'll be ready to go," Dak said.

Dak’s teammates said it will take a lot more than a hurt shoulder to keep him from playing.

“Dak’s gonna play. I think he’s resting up, getting everything as right as it can be by game time. I’ve dealt with some AC joints and they’re tough. I couldn’t imagine having to throw with them so... but I know Dak. I know his toughness. I know he’ll pay,” said running back Ezekiel Elliott

“Knowing Dak, you’d have to kill him to keep him off the field,” said Cowboys guard Zack Martin.

“I think you’d have to tell him he couldn’t play in that game. I don’t think there’s any way that he’d take himself out. You know, he’s one of those guys you’d have to hold back with a leash to be able to not be out there,” added Travis Frederick, the team’s center.

The Cowboys still have playoff chances if they lose Sunday. Things just get more complicated.

When asked about Sunday's game, the players said every game is equally important. But of course, a win would let many fans breathe a sigh of relief.

Coverage starts with the FOX NFL Pregame Show at 10 a.m. and then at noon the New Orleans Saints play the Tennessee Titans. The day wraps up at 10 p.m. with FOX 4’s Free 4 All.