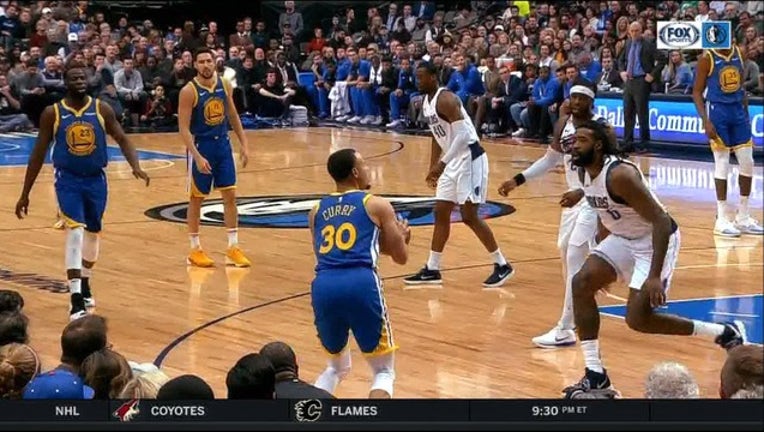 DALLAS (AP) - A day after the Dallas Mavericks got the bad news that backup point guard and team sparkplug J.J. Barea was lost for the season, Stephen Curry brought more bad news - in the form of 11 3-pointers.

Curry scored 48 points and tied his season high for 3s in a game as the Golden State Warriors held off the Mavericks 119-114 on Sunday night.

"We just couldn't get Curry under control," Mavericks coach Rick Carlisle said. "He was brilliant tonight."

Curry's 11 3s were the most ever by a Mavericks opponent. The last one was his most important, snapping a 114-all tie with 42 seconds to play. Both Curry and Warriors coach Steve Kerr credited Kevin Durant for switching play calls to get Curry shots rather than taking shots of his own.

"That was just (Durant) taking the initiative, knowing that I had a hot hand going," Curry said. "Call it a decoy in terms of him being in the action, but allowing me to work. The way they were defending us, it just made sense tonight."

Durant added 28 points for the Warriors, and Klay Thompson had nine of his 16 in the fourth quarter as the Warriors received a tough test from a Dallas team playing without its top two point guards, Dennis Smith Jr. and Barea.

Luka Doncic scored 26 points for Dallas and Harrison Barnes had 22. Jalen Brunson had 12 off the bench in 30 minutes, in place of the injured point guards.

After Curry's shot, Draymond Green blocked Brunson's drive at the other end and secured the loose ball. The Mavericks forced a miss, but Barnes turned the ball over in the frontcourt with 5 seconds left. Curry sealed the game with free throws.

"He had mismatches," Durant said. "He was making shots over everybody tonight, so why run plays? Just give him the ball."

Dallas missed its final eight shots from the field.

"You always can get better shots," Doncic said. "We were in the bonus so we wanted to drive the ball. Today wasn't the day."

Devin Harris gave Dallas its first lead since the second quarter with a driving layup to make it 105-103 with 5:29 remaining. Harris followed that with a 3 for a five-point lead, capping an 11-0 run.

Curry tied it at 114 with a floater in the lane with 1:39 to play, and Doncic missed a 3 at the other end, setting up Curry's winner.

BAREA TO HAVE SURGERY MONDAY

Carlisle said Barea would have surgery Monday to repair his ruptured right Achilles tendon. Barea suffered the injury in the fourth quarter Friday night against Minnesota and is out for the season.

Barea was averaging nearly 11 points and six assists per game.

Barea's teammate Wesley Matthews suffered the same injury in March 2015 while playing for Portland. Matthews signed with Dallas that offseason and returned to the NBA early in the 2015-16 season.

Mavericks: Curry's 19 3-point attempts was also the most all-time by a Dallas opponent. . Smith missed his third straight game with back tightness. . Carlisle received a technical foul with 49 seconds left in the second quarter, courtesy of referee Ed Malloy following the coach's animated response to a non-call on a play Carlisle thought was a Warriors foul.

Warriors: At Denver on Tuesday in a matchup of the Western Conference's top two teams.