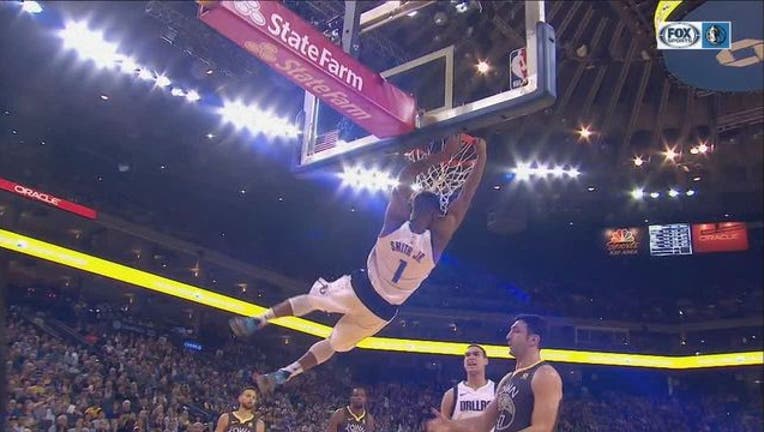 OAKLAND, Calif. (AP) - Stephen Curry had 20 points, eight assists and seven rebounds, and the Golden State Warriors bounced back from a tough recent stretch to beat the Dallas Mavericks 121-103 on Thursday night.

Curry's pretty three-point play with 1:28 left in the third put the Warriors up 88-83, and once Golden State got going in transition the Mavericks couldn't keep up in what became a dunk fest. The Warriors began the fourth on a 14-5 tear.

Despite another slow start, Golden State eventually found its groove and delivered all the big plays when it mattered.

The defending champions had dropped three of four, including their worst defeat at home in Tuesday's 125-105 loss to the Thunder.

Durant dunked in transition on back-to-back possessions late in the second quarter, one off a steal he made, and Andre Iguodala also had a slam as the Warriors sent the game to halftime tied at 60.

Green was fined $50,000 by the NBA for directing inappropriate and offensive language toward an official during the Oklahoma City loss.

Green was ejected with 8:13 remaining after a second technical for arguing with the officials, specifically female referee Lauren Holtkamp. The NBA said the specific incident for which he was penalized occurred in the second quarter.

On Thursday night, Green got hit with his 14th technical of the season - two away from an automatic suspension - in the second quarter for arguing after a delay of game warning.

Green will wear clear braces for a couple of weeks after his front right tooth was knocked back in a collision with Russell Westbrook during Tuesday's loss.

"It hasn't died. Hopefully it stays alive," he said.

Mavericks: Dallas signed guard Kyle Collinsworth for the rest of the season. He previously had a pair of 10-day contracts. "I'm very happy to have him back," coach Rick Carlisle said. "He's done some very good things since he's been with us. He's earned this opportunity. So, I'm happy for him. And I'm sure all of our guys are." ... F Harrison Barnes missed facing his former team as he sat out a second straight game with a sprained left ankle. ... The Mavericks were swept 4-0 in the season series.

Warriors: In the first, Curry passed Sacramento's Vince Carter (2,082) for sole possession of seventh place on the NBA's all-time list for made 3-pointers. ... Green became the 10th Warriors player in franchise history to reach 600 career steals. ... The Warriors avoided their first three-game skid since March 8-11 of last year when Durant was out with a left knee injury. ... Raiders WR Michael Crabtree sat courtside.