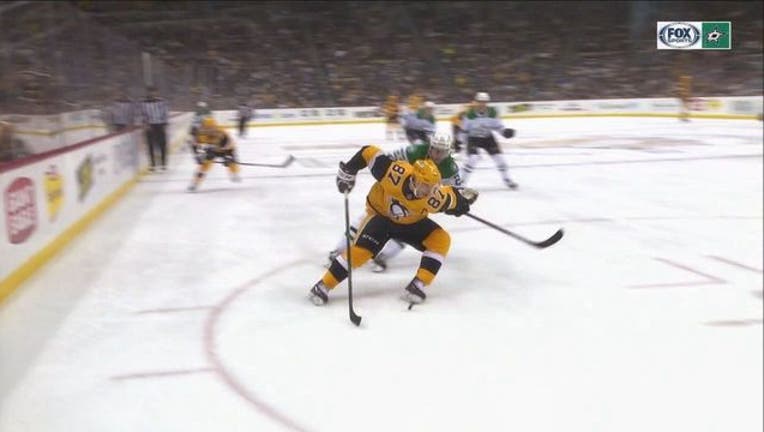 PITTSBURGH (AP) - Sidney Crosby returned from an upper-body injury to pick up a goal and two assists and the Pittsburgh Penguins drilled the Dallas Stars 5-1 on Wednesday night.

The Pittsburgh captain missed three games after getting hurt last week, the latest setback during a forgettable early opening quarter of the season for the perennial Stanley Cup contenders.

Crosby provided Pittsburgh with a needed spark. He set up Jake Guentzel for a goal less than 4 minutes into the game and provided a highlight-reel marker later in the opening period when he raced to the net and smacked in a rebound past Anton Khudobin to give Pittsburgh a three-goal lead.

Evgeni Malkin, Patric Hornqvist and Tanner Pearson also scored for the Penguins. Two days after letting a 4-1 advantage disappear in a loss to Buffalo, Pittsburgh clamped down on the Stars. Casey DeSmith was rarely tested early and finished with 18 saves.

Mattias Janmark spoiled DeSmith's bid for a shutout with a third-period goal. Khudobin was pulled after Pearson beat him with a slap shot on the breakaway made it 5-0. Khudobin stopped just 11 of 16 shots. Rookie Landon Bow stopped 14 shots in his NHL debut.

TAMPA, Fla. (AP) - Steven Stamkos had a goal and three assists and Tampa Bay beat Florida to reclaimed the top spot in the Eastern Conference.

Nikita Kucherov and Ryan McDonagh each had a goal and two assists. Mathieu Joseph, Yanni Gourde, Adam Erne and Dan Giradi also scored, J.T. Miller had three assists, and Louis Domingue made 40 saves. The Lightning are 11-1-1 at home against Florida since the start of the 2013-14 season.

Panthers left wing Mike Hoffman extended his points streak to 17 games (10 goals, 20 points) with a late third-period power-play goal. He is the fifth player in NHL history to have a points streak of at least 17 games in his first season with a franchise.

Troy Brouwer and Aleksander Barkov also scored for the Panthers.

Chris Kreider had a goal and an assist, and Cody McLeod, Neal Pionk and Kevin Hayes also scored to help the Rangers win for the ninth time in 11 games (9-1-1). Kevin Shattenkirk and Mika Zibanejad each added two assists in the Rangers' seventh straight win at home, now by a combined 26-10 margin.

The Rangers ended an eight-game skid (0-7-1) to the Islanders, who had won 12 of the previous 13 meetings, including a 7-5 win at home last Thursday night.

WASHINGTON (AP) - Tom Wilson, Andre Burakovsky and Michal Kempny scored to give Washington an early lead, and the Capitals held off Chicago.

Wilson, playing in just his fifth game after sitting out the first 16 because of a suspension, scored his second goal of the season just 54 seconds in after upending Chicago goalie Corey Crawford.

BUFFALO, N.Y. (AP) - Evan Rodrigues had a goal and an assist in Buffalo's four-goal first period, and the Sabres extended their NHL-best winning streak to seven games.

Jeff Skinner, Tage Thompson and Johan Larsson also scored in the opening period for the Sabres. Sam Reinhart added an empty-net goal in the third, and Carter Hutton made 23 saves.

John Tavares and Kasperi Kapanen scored for Toronto. The Maple Leafs are 9-2 on the road.

DETROIT (AP) - Andreas Athanasiou tied it midway through the third period and scored 49 seconds into overtime to lift Detroit past Boston.

Jimmy Howard stopped 34 shots and Tyler Bertuzzi also scored for Detroit. The Red Wings have won nine of 11 and are over .500 (10-9-2) for the first time this season.

Kyle Palmieri and Nico Hischier also scored for the Devils, and Keith Kinkaid stopped 24 shots to end the team's two-game skid. Jonathan Drouin and Max Domi scored for Montreal. Domi has a point in 11 straight games. Carey Price made 23 saves.

NASHVILLE, Tenn. (AP) - Pekka Rinne made 28 saves to set an NHL record for wins by a goalie from Finland, and Nashville spoiled Craig Berube's first game as St. Louis' coach.

Robert Thomas had the lone goal for the Blues. Berube took over as interim head coach Monday night when Mike Yeo was fired.

Matt Dumba also scored twice to help the Wild end a two-game slide and win for the 12th time in 17 games. Mikael Granlund had three assists.