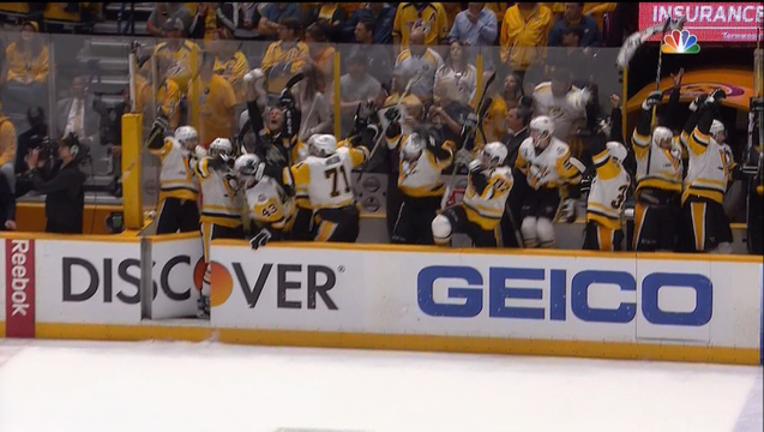 NASHVILLE, Tenn. (AP) - Even Sidney Crosby and the Pittsburgh Penguins are going to be challenged trying to top this.

Crosby was awarded his second consecutive Conn Smythe Trophy as the MVP of the Stanley Cup playoffs, and goalie Matt Murray made 27 saves for his second straight shutout as the Penguins became the first team to repeat as champion in nearly two decades with a 2-0 win over the Nashville Predators in Game 6.

That doesn't include Crosby also winning the World Cup of Hockey title before this season started, along with tournament MVP. He followed that up by leading the NHL with 44 goals, and Crosby was at his best in this Cup Final leading all scorers with seven points - one goal and six assists, including three in a 6-0 win in Game 5 that put the Penguins on the verge of their latest title.

Crosby also became only the third man to win back-to-back Conn Smythe trophies. All within a calendar year.

"You have a small window to play and to have a career, and I feel fortunate, but I also understand how difficult it is, so you just want to try to make the best of it," Crosby said.

The Penguins won their fifth title - all of them clinched on the road - to tie the Wayne Gretzky-Mark Messier-era Edmonton Oilers for sixth on the all-time list and the most by any non-Original Six franchise. The Detroit Red Wings in 1997 and '98 were the last champion to defend their title. The Penguins are the first to do it in the salary-cap era.

"It starts with Sid, our captain," coach Mike Sullivan said. "He's just such a terrific person and has such an appetite to win, and I think it's really contagious amongst our group."

Crosby did have some help. Murray is the first goaltender in NHL history to win the clinching game for the Stanley Cup in each of his first two seasons. He also set a rookie record with two shutouts in a Cup Final.

The Penguins also needed the second-latest clinching goal in regulation to finish off the Predators, who had played their way to their first Stanley Cup Final after being the last team into the playoffs. Patric Hornqvist, the last pick of the 2005 draft (by the Predators), scored the game-winner for Pittsburgh with 1:35 left by banking the puck off Nashville goalie Pekka Rinne's left elbow. Carl Hagelin added an empty-net goal.

"There's been a lot of guys telling us we can't do it, and now we're standing here," Hornqvist said. "We're going to celebrate in Pittsburgh in a few days. This says a lot about this team. We've battled through a lot."

The celebration on the ice last a long time. Crosby took the Cup from NHL Commissioner Gary Bettman before handing the trophy off to veteran defenseman Ron Hainsey who passed it to veteran forward Matt Cullen, who may have played his final game at the age of 40.

Nashville lost for just the first time in regulation on home ice this postseason, and this one had some hard luck. Colton Sissons had a goal erased by a whistle 67 seconds into the second period . The Predators went 0 of 4 with the man advantage, including 32 seconds of a 5-on-3 in the third. Sissons and Filip Forsberg each hit the post in the third period.

"It's going to sting, it's going to hurt for a while," said Nashville defenseman P.K. Subban, who made the Predators a Cup contender when he was added in a stunning trade nearly a year ago.

The disallowed goal will be remembered in Nashville for a long time. Referee Kevin Pollock blew the whistle when he lost sight of the puck, which was sitting behind Murray with lots of space in the crease for Sissons to tap it into the net.

"I know he lost sight, and we all make mistakes," Rinne said. "It was tough for sure."

The Penguins capped their 50th season in the NHL's centennial year with the third championship for Crosby and a handful of teammates from the 2009 title team, surpassing the two won by the Penguins teams led by current owner Mario Lemieux in the 1990s.

And it's the second championship for Sullivan, who has yet to lose a playoff series since taking over after Mike Johnston was fired. Sullivan is the first American-born coach to win the Cup not once, but twice.

"It's been an amazing year from the start, trying to repeat," Lemieux said. "A lot of these guys played injured in the playoffs and showed a lot of character. Of course, Sid being the best player in the world again and winning the Conn Smythe. He was our leader and picked up the team when we needed it."

The loss ended the upstart Predators' deepest playoff run in their 19-year history and one that became the talk of the town - and the league - with all their country stars, catfish tossing and aggressive play on the ice.

Having won just three of 12 playoff series before this year, Nashville opened this postseason by eliminating the top-seeded Chicago Blackhawks in four games. In doing so, the Predators became the first eighth-seeded team to sweep a first-round series since the current playoff format was introduced in 1994. Nashville went through St. Louis and then Anaheim to the Final, where only captain Mike Fisher on the roster had ever played before.

The Penguins ruined Nashville's star-filled party on the final night of CMA Music Festival to set up another celebration of their own.

"We've got a collection of guys who understand what it takes to win," Crosby said.

Notes: Lemieux won the Conn Smythe in 1992 and 1992, and Bernie Parent was the first to win the MVP trophy in consecutive years in 1974 and 1975. ... Murray is the first goalie with two shutouts in one Cup Final since Boston's Tim Thomas and Vancouver's Roberto Luongo had two apiece in 2011. ... Only Dave Bolland's game-winner in 2013 came later in regulation to clinch a Stanley Cup. He scored at 19:01 for Chicago. ... Nashville finished the series going 0 of 8 on the power play over the final two games.