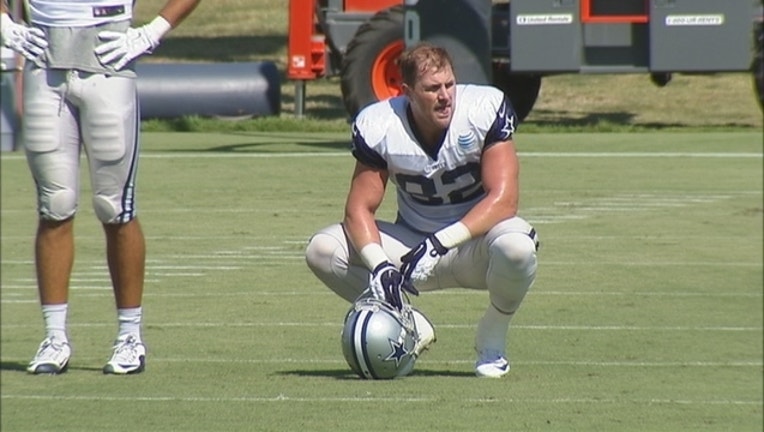 The Dallas tight end didn't return from a broken jaw or a ruptured spleen way earlier than expected in previous years so he could say he was the Cal Ripken of the NFL.

Same with playing through two sprained ankles and a sprained left knee this week.

"The focus is not about being a tough guy," Witten said Thursday, the second straight day he was listed as limited in practice. "It's about going out there and playing and playing well. That's what I've been trying to do all week is get myself in position."

Witten expects to be in the lineup Sunday when Atlanta visits in a matchup of 2-0 teams. He has missed one game in 13 seasons — Week 5 of his rookie year in 2003 with a broken jaw.

Three years ago, he played in the season opener at the New York Giants just 23 days after a hit ruptured his spleen in a preseason game at Oakland.

So it should have been little surprise to coach Jason Garrett last week in Philadelphia that as coaches tried to make adjustments to personnel each time Witten was injured, they would look up and see him in the huddle.

"I think he missed about a play and a half," Garrett said.

Third-year tight end Gavin Escobar is surprised it was that many.

"He's the toughest guy I've ever seen play football," Escobar said. "I was surprised seeing him run out of the huddle. He doesn't leave the field. Obviously something was going on."

Quarterback Brandon Weeden, set for his second start for Dallas with Tony Romo sidelined by a broken left collarbone, joked of secondhand information that Witten "couldn't even walk" in the locker room Monday. Witten just chuckled.

"That's even after a good game," he said with a wide smile. "That's what happens in year 13. You guys know that."

Practice resumed Wednesday, and Witten was seen walking gingerly in a hallway outside the locker room on his way back to the training room after the workout. All three aching joints were wrapped, and he assured reporters he was planning to play against the Falcons.

He glanced back as he entered the restricted area with a "see you guys tomorrow," as if to say all things were normal, including his regular weekly visit with reporters.

"Witten is a certified war daddy," defensive end Jeremy Mincey said. "He plays hard. He plays with heart. He plays with passion and desire. I'm sure it's just nicks and bruises."

Witten caught a go-ahead touchdown pass from Romo with 7 seconds left in the season-opening 27-26 win over the Giants. The 33-year-old is now 42 catches from joining Tony Gonzalez as the only NFL tight ends with 1,000 catches and 10,000 yards.

Three years ago, when Witten returned against the Giants after the spleen injury, he was held to two catches for 10 yards. But as he fought through the injuries against the Eagles, he came up with seven catches for 56 yards. Garrett credited him with getting the offense going in a 20-10 Dallas win that was mostly dominated by the defenses.

The question for the coaching staff is determining how effective Witten can be with two bad ankles and a sore knee.

"He has a great credibility with us," Garrett said. "He's demonstrated a lot through his career that he can get himself ready to play when things don't always look so good for him early on in the week."

Then Witten tries to shrug off the injuries throughout his career as nothing significant before sheepishly smiling when he remembers the spleen.

"But other than that, there are things you can work through," he said. "Look, I love playing and I would expect my teammates to do the same thing, get out there. It's a great opportunity in front of us, where we are right now."